Big Red Car here.  Things are going well in the ATX, as usual.  On Earth as it is in Texas!

Today is a solemn day, the observance of the American led attack from England on the beaches of Normandy.  The Allies had prepared long and hard — a huge startup effort — to land on the mainland of Europe and to expel the German invaders.

With the passage of time, the memory of D-Day is being forgotten and that is simply wrong.

The Allies launched a massive amphibious invasion of the European mainland on 6 June 1944 commencing at 6:30 AM.  The attack and ensuing combat would ultimately conclude with the unconditional surrender of the German army and the death of Adolph Hitler.

Paratroopers, including the famed 101st Airborne and 82nd Airborne Divisions leapt into a black night hours earlier to seize key crossroads and to prevent the Germans from marshaling reinforcements to the landing beaches.  Canadian and British Airborne formations also entered the fray under silk.

The Allies achieved complete tactical surprise by virtue of the plan and the decision by General of the Army Dwight David Eisenhower to authorize the landings in less than favorable weather conditions.  His daring in making this fateful decision will forever be enshrined as the ultimate risk taken by a military commander in the face of adversity.

It is reported that when he went to see the 101st Airborne off at their aerodromes before their night drop behind enemy lines, that General Eisenhower carried in his pocket a statement indicating that the landings had failed and taking full responsibility for their failure.

The ability to storm ashore on a hostile and well defended beach was a unique American military skill having learned this art in the North African, Sicily, Salerno and Anzio landings.

The most accomplished American amphibious planner was General Omar Bradley who had had a pivotal part in each of these landings from the planning perspective.  Bradley has never been given the credit due for his personal expertise in this arena of the European theater.

This ability to concentrate and deliver amphibious attackers under the watchful eye of naval and air bombardment is a very complex undertaking.  The ability to get troops ashore, assemble coherent units in the face of enemy resistance and to then breakout by destroying the initial enemy defensive positions is a very tough undertaking in ideal conditions.  Under fire, it is remarkable that it can even be done. 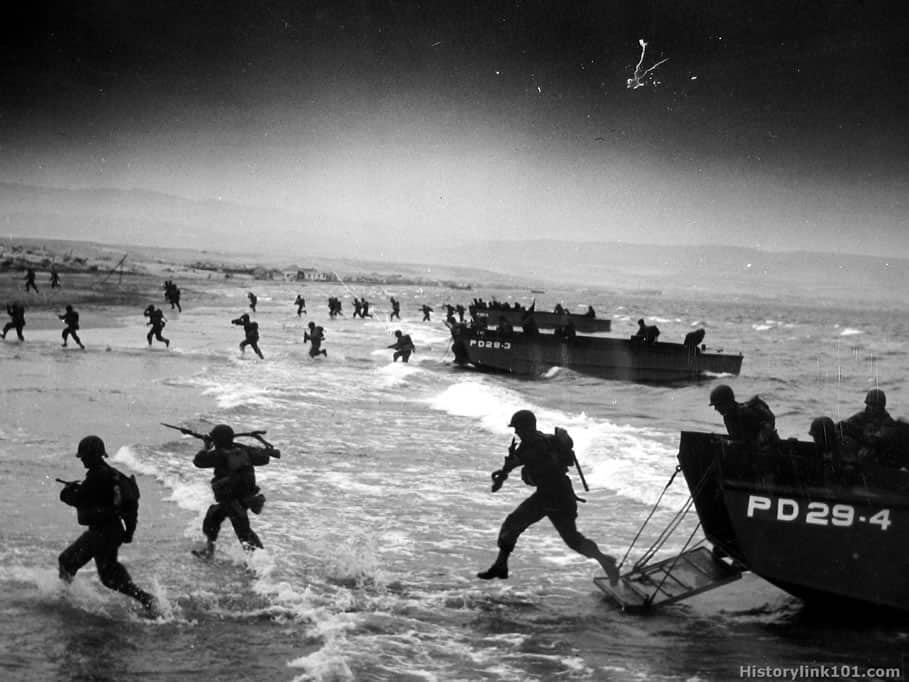 The American leadership not only did it but did it extremely well.  It was American know how, American ingenuity and American planning that made the notion of amphibious warfare possible from the complex plans to the specialized equipment to the exquisite fire planning to the training of entire Divisions to land in the face of enemy fire.

In the Pacific, the US Marines — who landed on much smaller objectives and in smaller unit sizes — made it into an art form.  The Marines arguable faced some of the toughest fighting in the history of World War II in exploiting their landings on islands whose names have been etched into the American and USMC psyche.  Semper Fi, from the Big Red Car, you tough bastards.

Behind the landing beaches at Normandy are the American cemeteries containing many of the war dead whose lives were sacrificed to make these landings — and the ultimate defeat of Germany and Hitler — successful.  It is hallowed ground.

America was never a conquering army and all America ever asked for from the countries it liberated was enough ground to bury our dead.  Sacred, hallowed ground to inter the remains of those who had paid the ultimate price for liberty and freedom for both our countrymen and our allies.

What can you do?

Today take just a second to reflect that we enjoy our current freedom and liberty because of our ability as a Nation to undertake such complex military operations — celebrate and respect this American feat of arms.  It was American planning, expertise and know how which made D-Day and the entire Normandy invasion a success.

Think of the sacrifice of D-Day when almost 3,000 men were killed and another 6,000 wounded to snatch a toehold on the Continent and to ultimately whip the German Army on its home field.  This was an American and Allied sacrifice which was the first of many price tags to be paid to buy our freedom and liberty.

Do not let the flame of D-Day be snuffed out.  Remember when America and its Allies went toe to toe with evil — did not blink and whipped them in open combat.  This is what makes America the great Nation it will always be.