Creating an impediment to free navigation and attacking ships of other nations are historic acts of war inviting retaliation from aggrieved parties. In fact, we have seen this movie before with tragic consequences.

Back in the day, Iran and Iraq were locked in a war that ultimately incurred 1,000,000+ casualties. Maybe as many as 2MM.

The Iraq v Iran war has been compared to World War I in that two modern armies went at it over a protracted period of time while engaged in static, trench warfare, and human wave attacks. A bit inaccurate as the Iranians used very sound mobile warfare and deep strike air attacks at times.

Massive amounts of soldiers were deployed with the Iraqis striking with six divisions in the first attack. From a troop perspective many campaigns employed forces generally larger than the Allied D-Day operation. Big war.

Professional soldiers have studied this war as it entailed massive tank battles (the Iraqis ended the war with 4,000 tanks — fielding the 4th largest army in the world that they would one day unleash against Kuwait.)

It was also the first time that opposing armies fought with ballistic missiles, a country attacked a nuclear reactor, and helicopters engaged in air-to-air combat. Modern armies used poisonous gas against each other with impunity — the US sent military observers to study the use of gas by the Iraqis.

There was one phase — The War of the Tankers 1984-86 — when the Iranians and the Iraqis indiscriminately threatened shipping in the Straits of Hormuz. This was done to prevent the warring parties from receiving oil revenue.

During this phase, the Iraqis sunk the largest oil tanker of the times and more than 600 ships were attacked. The Russians and the Americans took to “re-flagging” the tankers of other countries thereby mocking the combatants and daring them to attack Russian and American ships.

The Americans, based on repeated provocation, took issue with the Iranians and struck several oil platforms and sunk several Iranian ships. You will recall that the Americans shot down a civilian airliner with 290 deaths, Iran Air Flight 655 was erroneously thought to be an F-4 Phantom threatening a US warship. It was a huge disaster. 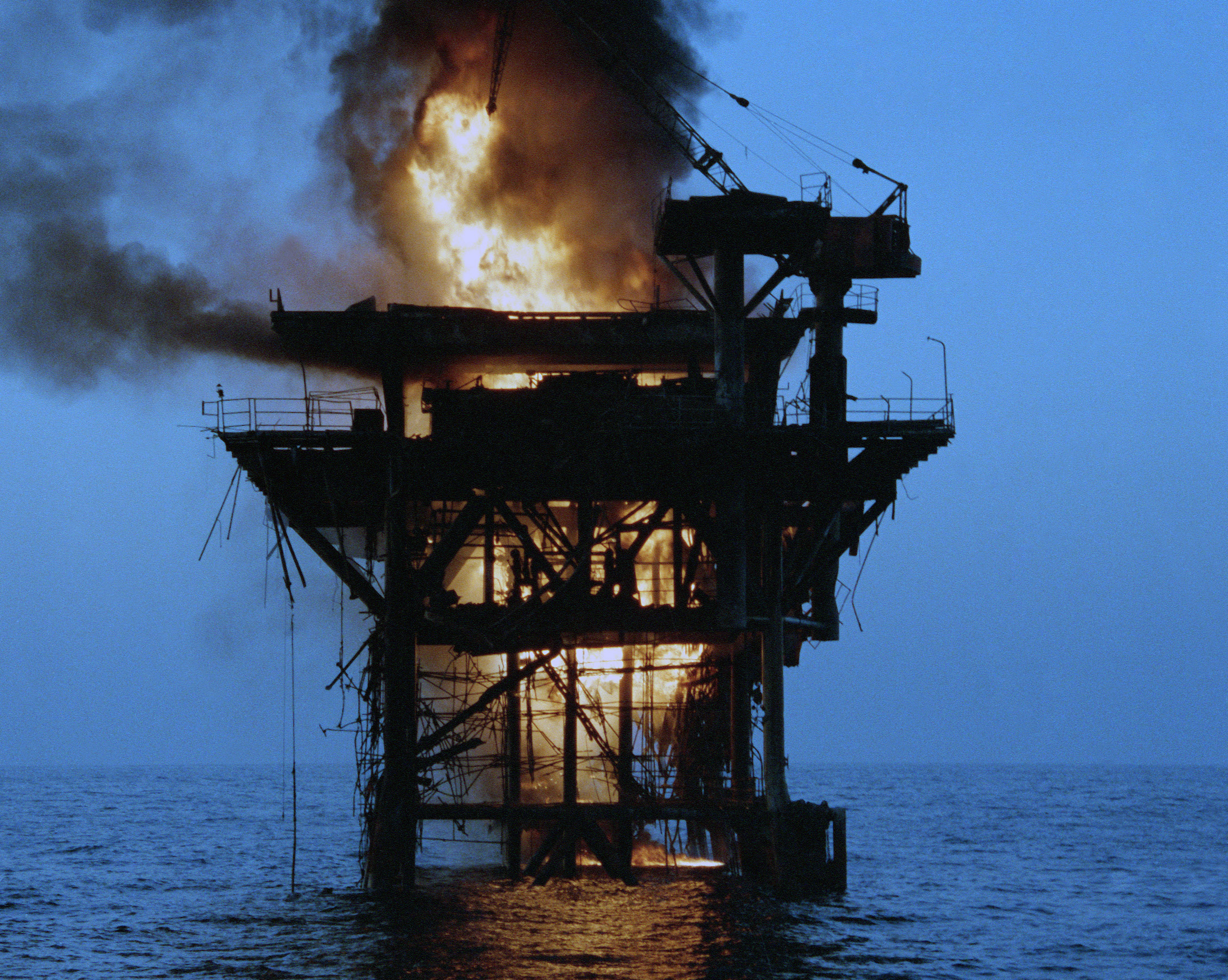 The Iraqis struck the USS Stark, killing 37 US Navy sailors and wounding 21. The Iraqis also sunk the largest tanker ever built, the Seawise Giant. The Iraqis conducted 3X as many ship attacks as the Iranians. The French Exocet missile was the threat of choice and it worked like a charm. 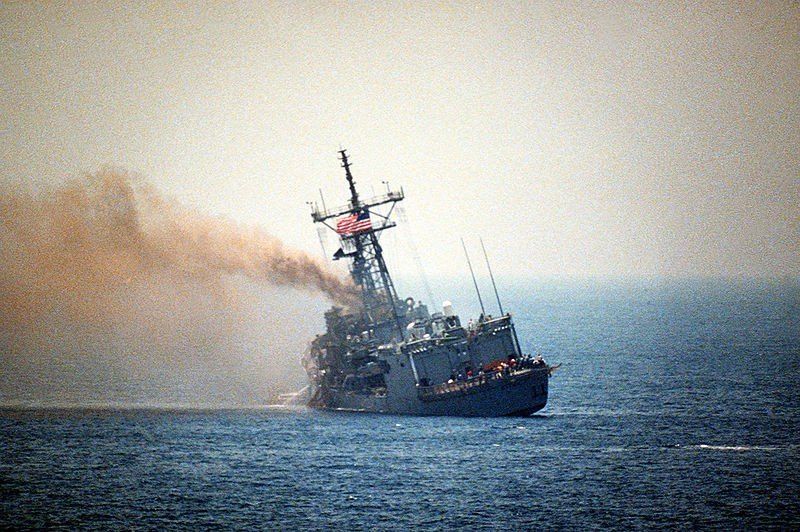 The Iraqis, ultimately, took responsibility for the incident and paid reparations to those killed and wounded.

Keep your ears open to hear more about the Exocet ship-to-ship or sir-to-ship missile. It is a very fierce weapon.

The Iranians use pesky fast attack  boats — which the US Navy dispatched with aplomb during its involvement.

I tell you this for a handful of reasons:

1. Attacking tankers is not a novelty in and around the Straits of Hormuz. It rests in the institutional memory of the Iranians. 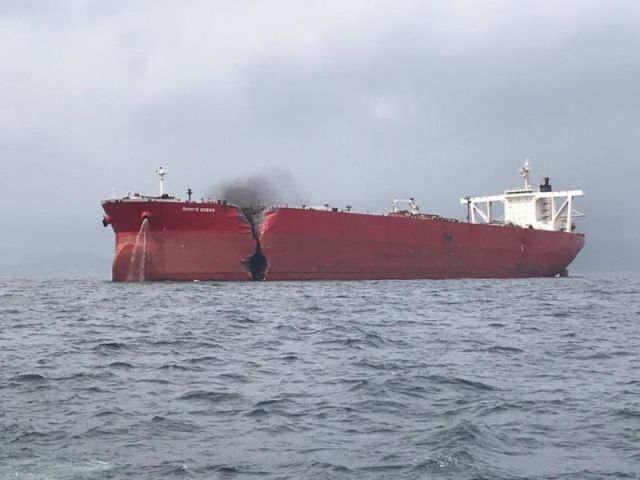 2. Thirty percent of all the oil at sea goes through the Straits of Hormuz. One more reason why US energy independence achieved under the current admin is so damn important.

They just got in bed with either the Russians or the Americans who re-flagged their vessels.

They bought more insurance – typical insurance policies didn’t cover “acts of war” so the premiums skyrocketed driving the price of crude up and the price of gas at the pump.

4. The Iraq v Iran War concluded with a United Nations brokered cease fire, but was a huge conflagration.

It is very important to know that the Iraq v Iran war was started by the Iraqis, but was fought by the theocracy — the post Ayatollah theocracy of Iran.

We do not need to be drawn into another shooting war in the Middle East — Iraq, Syria, Afghanistan, the War on Terror, support for Israel — ENOUGH!

On the other hand, Iran cannot be allowed to strike oil tankers with impunity. They are, clearly, testing the resolve of the West while reeling from economic sanctions (which the Europeans are trying to minimize to their everlasting discredit) and trying to extract concessions for the terrible Iran Nuke Deal.

They are simultaneously threatening to resume the production of pre-cursor nuclear weapon materials.

Let’s take a second and remember who Iran is:

1. Iran is a despotic theocracy that has stifled a well-educated citizenry and pushed them back into borderline Dark Ages. The Ayatollahs are despots and horrific butchers.

2. Iran is the largest state sponsor of terrorism in the world funding Hamas, Hezbollah, and the Quds.

3. Iran is engaged in military mischief in Syria, Iraq, Yemen, Lebanon, and Gaza. They do this directly and with their checking account.

They are suppliers of rockets and IEDs. They are the arsenal of terror, in addition.

4. The United States economic sanctions are working and the Iranian economy is a basket case.

5. Iran is a provocateur extraordinaire as it relates to Israel and Saudi Arabia — our two most important allies in the region.

I suggest the Trump admin consider the following actions — not right now, but in the future:

1. Continue the economic sanctions — no Iranian oil goes anywhere and anybody who facilitates generating oil revenue for Iran gets punished.

The US Iranian sanctions are working. Big time!

2. Twist the arms of the feckless Europeans as it relates to creating mechanisms to get around US sanctions. These are our allies?

3. Be prepared to sink any and all ships of the Iranian Navy engaged in attacking oil tankers.

4. Be prepared to destroy all shore support for Iranian Navy ships engaged in attacking oil tankers. Knock out the berthing, maintenance, and re-fueling capabilities for these ships.

5. Crater the Tehran airport runways — except for one — as a sign that Iran is not a member of the civilized world. Make it clear that if another tanker is struck, the rest of the runways will be cratered.

6. If the Iranians don’t stop striking tankers, then the re-fueling facilities at Tehran Airport should be destroyed.

7. All of this destruction is contemplated being done by stand off weapons, like cruise missiles.

So, there you have it, dear reader. Not a “go” idea, but something to consider if the situation doesn’t right itself. Iran, an unchecked Iran, is a threat to peace in the region.