Another slightly gray Monday in the ATX though it will be 65F before the day is over.

So, do you think you are smarter than a billionaire?

If you have been watching the news, you are aware of some exciting changes in Jeff’s relationships. He is divorcing his wife of some quarter of a century, Mackenzie. Here they are in happier days. 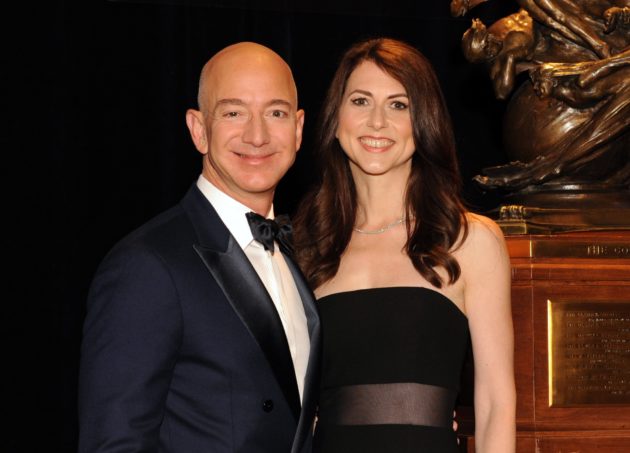 OK, stop right there. Mackenzie is going to come out of this OK. First, Washington State is a community property state; there is no pre-nup; her next husband will be taller and more hirsute. So, don’t cry for me, Argentina. She gets half? She’s the richest woman on the planet.

Do not worry, Jeff is not going to lack for company. He has taken up with a wonderful woman, helicopter pilot, named Lauren Sanchez. I am sure you can see the attraction.

So, in the course of deciding to shed the old snakeskin and to take up with the newer alluring serpentine Miss Sanchez — oops, turns out she is married after all. Sorry.

In the wooing of Lauren, Jeff sent her a number of texts, romantic texts.

When these texts came to light [talking to you, National Enquirer], the cat was out of the bag and Jeff stepped up to deliver the hammer blow. He leveled his slightly taller wife and the four kids. Ouch.

The texts from Jeff to Lauren were pure Shakespeare with such heartfelt, literary masterpieces as:

“I want to smell you, I want to breathe you in. I want to hold you tight….”

“You make me better. You’re meant to be. I know it more clearly than I’ve ever known anything.”

One must assume he is referring to the decision to buy Whole Foods? Or the price increase on Amazon Prime?

OK, so we get it that Jeff didn’t hire a professional writer. I am certain he regrets that.

In the course of this chatter, not content with the loveliness of his words, Mr. Bezos sent digital pics to his new lover. What better pic to send in the course of wooing a girl than a picture of one’s anatomically correct male genitalia?

The pic caption said, “I think this belongs to you?” No, it did not, Big Red Car. Stop that.

For the record, the National Enquirer and Mr. Bezos are currently engaged in a cage match in which Jeff is trying to attain “victim” status which begs the question — who takes a pic of their own male genitalia and texts it to anyone? But, wait, I’m getting ahead of myself.

Are you smarter than a billionaire? Answer these two questions:

1. Are there any circumstances under which you would take a picture of your genitalia?

2. Are there any circumstances under which you would send the aforementioned picture of your genitalia as an attachment to a text message?

If you answered both of those questions “NO” or “Hell NO” or “GROSS” then you are smarter than a billionaire and may take an additional ten percent discount when shopping at Whole Foods. Ask for the dick pic discount.

But, hey, what the Hell do I really know anyway? I’m just a Big Red Car and you can take a pic of my carburetor any time you want, chica. Remember it’s Valentine’s Day this week.