Big Red Car here.  Wow, turns out the President is a regular reader of The Musings of the Big Red Car.

I asked him if he had a minute and we had a nice chat.  He’s not as tall in person as I thought but he was very gracious.  After the interview, we took a tour through Austin and stopped for some Q.  He said he had no money and I had to spring for the Q.  He said it was a new “tax”?

Anyway, here it is — the Big Red Car’s interview with President Obama.

Big Red Car:  So, Mr President, you’ve been President for almost six years.  What is your sense of what kind of job you’ve been doing?

President Obama:  Well, Big Red Car, by the way you really are a handsome mechanical beast and do you know you’re older and more experienced than me?  Speaking of which I guess the big thing I focus on today is how woefully inexperienced and unprepared I was and continue to be for this job.  I am so out of my depth it is frightening.  I really understand now I have no real executive experience and it was a huge mistake on my part to think I was adequately prepared for the job.  To all the folks who voted for me — huge mistake on your part.

Big Red Car:  Mr President, you may be a little tough on yourself.  Let’s move to Putin and Russia and the whole Ukraine/Crimea situation.  What do you think?

President Obama:  That Putin is a freakin’ maniac.  Do have to admit he has some pert little nipples for a regional power acting out from weakness.  When we chat on the phone, the dude is downright rude.  I can tell you from personal experience at the G8 meetings and such, don’t carry your lunch money or bill fold in your front pocket.  Vladimir will smack you, brace you up against the wall and take your lunch money.  Big time!  Last time he was in the US for a meeting, he gave Joe Biden a world class wedgie.   Haha, Joe was singing soprano for a few weeks after that.

I know Russia is a small, little regional power — my speech writers said that would really screw with Vlad’s mind.  Still I keep remembering the dude has nuclear weapons.  Can you imagine that crazy MFer with nuclear weapons?

Is this going to take much longer?  I’ve got to do some ShamWow-ing for OBAMAcare.  You know I have the attention span of an earthworm.

Big Red Car:  Speaking of OBAMAcare, how is that working out for you?

President Obama:  Look, Big Red Car, that bitch, Secretary Sebelius, screwed OBAMAcare up so bad I can’t spit.  Sure we had four years to launch it all but you knew we were going to wait to the end and pull an all nighter.  I should have bitch smacked that idiot out of my administration but Michelle says you can’t fire her because she’s a chick.  I told Michelle — by phone, cause that’s another lady you don’t want to rile up too much — that Kathleen is a stupid chick.  Stupid is not a disqualification to serve in my administration.  Wow, Joe Biden.  Haha, talking about stupid.  Uncle Joe, the Nation’s crazy uncle in the basement.

Big Red Car:  I don’t mean to pile on here but there are those who have expressed some disappointment in the number of lies that you have told, Mr President, as it relates to OBAMAcare.  How do you answer your detractors?

President Obama:  I would like to answer my detractors thusly — by extending my middle finger and reminding them I was re-elected through the efforts of some uninformed and ill informed low information voters or as I like to call them “my” people.  Thanks, dudes.  Sure I told a few outrageous lies, all that keep your plan or doctor or lower your premiums crap.  But, hey, what the Hell are you going to do about it?   I’m President.  You are not.   I told a few lies and I still get to be President.

To those who criticize all the recent changes, I say:  What the Hell can I do to help Democrats get elected and re-elected?  I’ll change whatever the Hell needs to be changed.  Is it all political expedience?  What planet you from, homie, of course.  I am Mr Politics.  Mr Chicago Politics and we ain’t playing.

Big Red Car:  Mr President, can we turn to the economy…..

President Obama:  Big Red Car, are you going to keep trying to make me look bad?  There’s nothing that makes me look bad like talking about the damn economy.  I tricked that idiot Boehner into thinking if he raised taxes I would cut entitlements.  Not going to happen.  Luckily he has a very short memory.

Big Red Car:  The other day on cable television the commentator made a joke about being the last black President.  How did that resonate with you?

President Obama:  WTF does that mean, Big Red Car?  How did that RESONATE with me?  I wanted to smack the beard off that white boy.  Let’s get something straight.

First, I am only half black.  When I do something really stupid, it’s the white half screwing up.

Second, I was raised in Indonesia — and people wonder why I’m a closet Muslim — and Hawaii.  Does that sound like the freakin’ ghetto to you, Big Red Car?  I am not a brother from the hood.

Third, I got none of that American slave blood in my veins.  I don’t even know how to talk ebonics like.  Haha.  No ebonics for me, Big Red Car.

Fourth, I went to Occidental, Columbia and Harvard.   Does that sound like a black man?  Affirmative action?  I got one thing to say GET SOME.

Big Red Car:  Speaking of your education, why do you think your transcripts have never been revealed or leaked?

President Obama:   Big Red Car, are you going stupid on me?  The reason those transcripts are not out there is simple.  Real simple.  I got some lousy grades.  I smoked a lot of choom and my grades were not very good.  All my transcripts say “foreign student”, Big Red Car.  You feel me, Big Red?

Big Red Car:  One last question, Mr President, given your rather extensive marijuana use in your youth how do you feel about using or smoking marijuana legally?

President Obama:  Not to state the obvious here, Captain Obvious, but smoking a bit of choom may be the only chance we got for world peace.  Last phone call, Putin asks me:  Barack, are you high?  I say to Vladimir:  You want to get high?  Haha, just kidding, Big Red Car.

On a serious note, I am planning on moving to Colorado when I leave the subsidized housing program here.  Why?  Legal marijuana.  I intend to stay stoned for at least 5 years to make up for things.

Big Red Car:  Mr President, thank you so much for sharing your views.  It has been helpful.

President Obama:  Glad to help but I have to admit getting interviewed by a freakin’ car is low even for me.  Don’t get me wrong, it’s better than getting interviewed by that jerkoff with the beard on cable.  That was some tired shit.  You be good, Big Red Car.  If you want to get high, let my people know and we can do it.  Thanks.

Shortly after the interview, I was subjected to some extensive censorship.  Some suits from the NSA and CIA came by and put this “do rag” on me.  Still it was an illuminating interview. 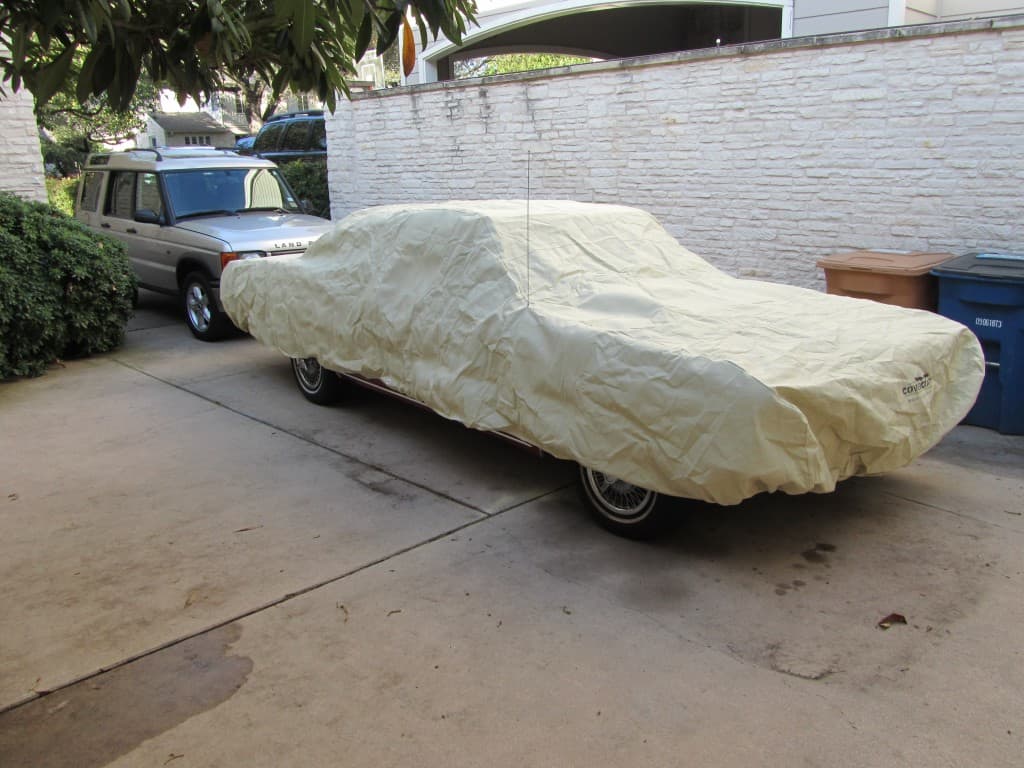