Something else which is hot is the economy. It is hot as evidenced by today’s GDP number which shows growth in excess of 4%. This is Q3 2018 (April, May, June 2018). US starts its fiscal year in October, but you knew that, right?

Couple this with low unemployment, high job growth, the beginning of real wage growth, increased capital spending, and some progress on the issue of trade and it is easy to see why the President was in the Rose Garden taking a victory lap.

When pressed to explain why growth has begun to accelerate, President Trump and his economic advisers pointed to reductions in regulations, the tax cuts, and the beginning of work on trade. They had a few other things, but those are the big ones.

The most important thing is that the White House is trying to create a fertile environment for growth. That is more important than many of the elements.

But, the purpose of my commentary today is to exercise caution. 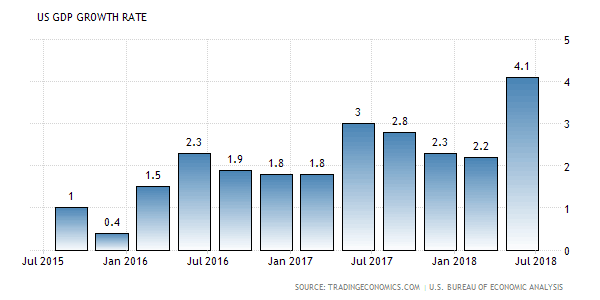 President Trump comes into office in January 2017. GDP growth is apparent, but, clearly, Q3 2018 (the last column) is a large deviation.

I preach caution because there are a lot of moving parts. Don’t get me wrong, I believe that the increase in GDP is truly for the reasons given, but I just want to emphasize that it is a sudden and precipitous change. Be wary.

I do think the following have or will happen:

1. The United States has cut a lot of regulations which were significant impediments to growth.

2. Energy is hot as a pistol. Texas is leading the way. Energy prices may be a little high, but we control our own destiny now more than ever before.

3. The tax cuts have spurred corporations to spend capital on physical plant and to repatriate foreign held profits. The man in the street is being assisted by the tax cuts.

4. A huge amount of accessible wealth has been created in the stock market in the last year and a half.

5. Unemployment is low, but that is a result, not a driver. Black and Hispanic unemployment – all time lows – has been reduced and is an enormous beneficiary of an improved job market. [Could be a huge driver of the mid-term elections.]

6. There is a general sense of optimism in the country as it relates to the economy. This is not intended to ignore the political anger focused on President Trump personally. 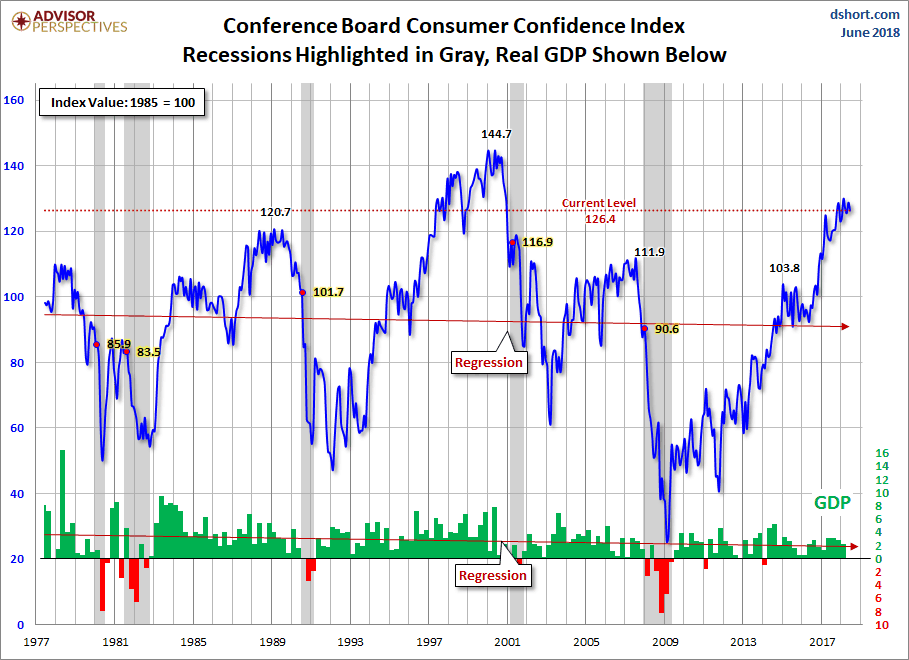 The trend is your friend. The trent for consumer confidence is upward. Notice how steep the curve is right after President Trump was elected. We are at a historic high level of confidence not seen since the late 1990s.

7. The issue of tariffs is now coming into focus with the European Union being the first to come to Washington, DC to make a deal.

In spite of all of this good news, I preach caution. Take it all with a grain of salt. There can be no question that near term developments are overwhelmingly positive, but just be wary.

I also believe that in a year, we will be seeing more growth, but between now and then there could be some surprises.

But, hey, what the Hell do I really know anyway? I’m just a Big Red Car. Have a great weekend, y’all. Call somebody who you haven’t spoken to in a long time.