Big Red Car here.  Nice weather all week in the ATX.  Bad situation getting worse in the Ukraine and Eastern Europe.

There are those students of history who will opine the seeds for World War II were planted when British Prime Minister Neville Chamberlain announced on 30 September 1938 he and a fellow named Adolph Hitler had achieved “…peace in our time…” by their signing of the Munich Agreement.  The results thereafter would prove Chamberlain to be wrong, very wrong.  The world would be plunged into seven years of conflict culminating with the US unleashing nuclear weapons on the Japanese in 1945.

The Munich Agreement formally ceded Czechoslovakia to Hitler based upon its affinity for its historic German roots and language.  If that sounds eerily like the situation in the Crimea and Ukraine, then you get high marks.  Bravo! 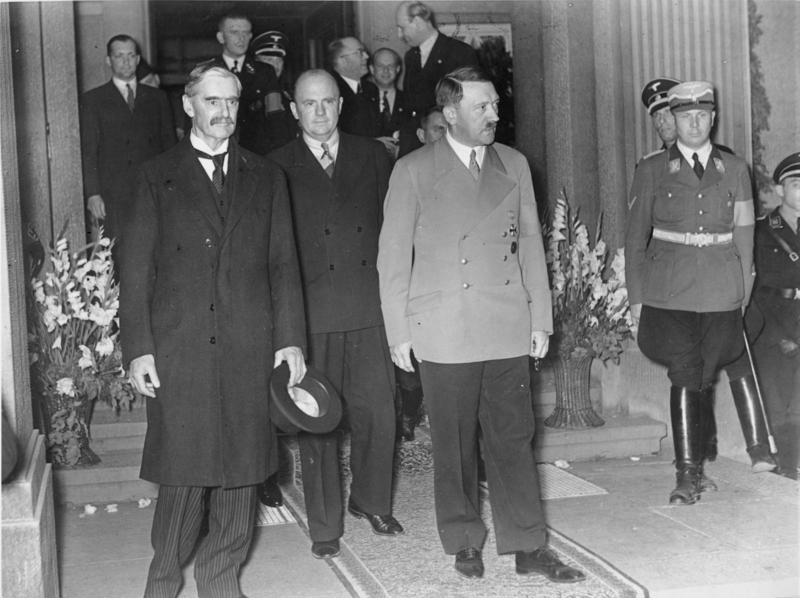 Hitler had taken Chamberlain’s measure in direct talks and found him to be weak and England therefore vulnerable.  Hitler assessed correctly England would not fight for Czechoslovakia.

Prime Minister Neville Chamberlain proved to be both an inaccurate soothsayer and an ineffective leader falsely lulling England into a sleep which left it unprepared for further German aggression.  His successor, Winston Churchill, absorbed the military unpreparedness in places like Dunkirk, rearmed Britain and led it through to victory when the US became involved as both the Arsenal of Victory and the source of great manpower.  It was American blood and treasure that defeated Hitler in no small part.

Hitler, who was simultaneously rearming Germany, was striving to create a Germanic speaking empire and continued to take whatever he fancied until faced with real war.  The resulting war went very well for Germany until they made the strategic blunder of fighting on two fronts and allowing America to come into the conflict.  Had he been more skillful, the outcome might have been more dearly priced and might have been different.

Today the emissaries of Russia, the United States, the Ukraine and the European Union will meet yet again to discuss and remonstrate about the Ukraine.  They will not be speaking about the Crimea because the Russian bear has made a meal of Crimea and is already digesting it.  The parallels with the situation in Czechoslovakia are chilling.

Let’s take a second to review the bidding here.

1.  Russia now owns the Crimea after fomenting a phony controversy using both its own forces and local forces.  It is fomenting a similar vintage of trouble in Eastern Ukraine today and has already begun to give the evil eye to Moldova and the Baltic states.

2.  The Crimea, under the influence of Russia, conducted a phony plebiscite in which, surprisingly, the decision to embrace Russia won overwhelmingly.   The Russians were kind enough to delay the announcement of the election results until after the actual mythical vote.

3.  The Crimea has been swallowed whole by Russia.  Burp!

4.  The West effectively has done nothing other than to kick Russia out of the G-8 of which Russian thug Putin had already missed a number of meetings.  Bonus points if you can describe any of the “costs” we have supposedly levied on the Russians.

5.  The US has sanctioned some individuals close to Putin and a bank in Russia.  These sanctions are laughed at by the individuals effected.  Library card, Disneyland type stuff.  Totally inconsequential and ineffective.

6.  Now there will be a set of talks in Geneva by diplomats.  Meanwhile the Russians have already begun to foment similar troubles in Easter and Southern Ukraine.

7.  The Russians continue to maintain a 40-60,000 man presence on the Ukrainian eastern border.

Why Big Red Car, is this happening?

Russia is led by a chap, one Vladimir Putin who has been in charge effectively for almost 20 years, who is hell bent on resurrecting the Soviet Union, the USSR.  He has called the dissolution of the Soviet Union in the early 1990s a “disaster” for two decades.  he believes NATO has been fomenting trouble on his borders.  He was able to make the US blink by sending President Obama a message he did not like the notion of American ABMs in Poland.  President Obama cancelled the program and sent his lunch money to Putin.  Putin took it and kept it.

Putin, having weighed and measured European and American leadership and resolve, believes the West will not oppose his plans as they are broke, war weary and ineffectively led.  Putin does not think the US or NATO will fight for Ukraine, Latvia, Estonia, Lithuania or Moldova.  Putin is probably right.

Putin thinks Pres Obama is an ineffective leader — all hat, no cattle.   He also thinks the US, the only credible countervailing force, is tired of war in far away places.   Want to attack Manhattan, America goes all in.   Want to attack Latvia, America goes:  “Pffffffft!  Sorry, we’ve got out own fish to fry.”

It is stupid to provoke Russia with words, meaningless sanctions and posturing.  Russia is going to keep pushing until someone or something pushes back.

President Obama and Putin have been speaking regularly on the phone.  That’s working out very well, no?  No, it isn’t.  Putin is a bully and President Obama is a weak leader.  Great speaker, weak real leader.

It is silly to say things like “Russia is acting out from weakness;” or, “Russia is a small country;” or, “Russia’s army is inferior to the US Army.”  These public utterances by an American President are not helpful.

You can forget about a deal with the Iranians on nuclear weapons.  The Iranians are getting a “Get Out of Jail” card on their entire bag of mischief.  The US is not going to undertake another war in Iran.  Not today.  Not ever.

NATO is not going to fight for Estonia, Latvia or Lithuania. 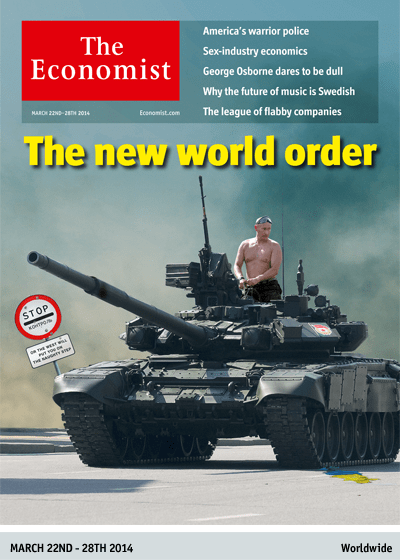 In much the same way the Munich Agreement did not bring “peace in our times”, the current situation is spinning out of control and is planting the seeds of another conflict.  Let’s not bullshit ourselves, Putin keeps pushing solely because he has had success and does not believe the underlying calculus has changed at all.  Why should he?

Putin is not deterred, he is emboldened, by recent events.

World War II required the US to ultimately field a military force of 13MM men.  It required much blood and treasure.  It set the world back by generations.  It killed millions.  It did not involve more than one warring party possessing nuclear weapons.

You have already witnessed the start of World War III.  Prepare for war.

But, hey, what the Hell do I really know anyway?  I’m just a Big Red Car.  Let’s say a prayer, not just for peace, but for inspired leadership and resolve.