Wait a damn second, Big Red Car. Canadian softwood lumber? A grudge match? What? You got some ‘splaining to do, Big Red.

Big Red Car here on a grayish Tuesday. Still, on Earth as it is in Texas, y’all!

Everyone was expecting the trade wars to start with Mexico or China. Nope — Canada.

Game on, y’all. And, President Trump started it, just like he promised he would. [Promises made, promises kept.] Get some popcorn, a lemonade, and a seat.

First, let’s know this is a complex issue with a bunch of talking which  has gone on for so long it has bridged more than a dozen US administrations.

Where did this come from, Big Red Car?

Whenever governments pick winners and losers, they screw it up. They can’t help themselves.

US timber interests are private. The government has no role in the production or pricing of US timber. The market decides US timber pricing.

It is a big business in Canada. 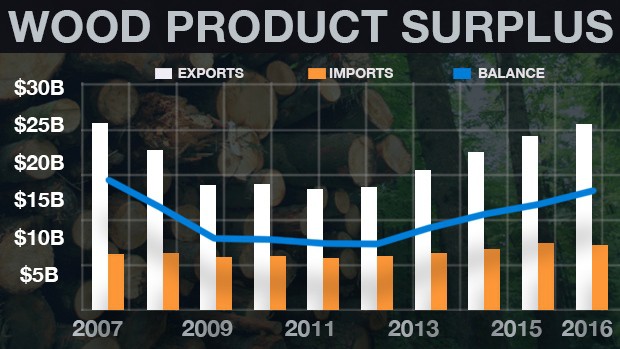 As you can see, Canadian exports are growing at a time when imports have been steady for a decade. This is a growth industry for Canada.

The Canadian lumber industry directly employs 250,000 and has another 300,000 related jobs. Canada has about 16,600,000 jobs currently filled. Big industry for Canada.

Mix governmental ownership of a critical asset and employment for citizens (voters) and you have a recipe for manipulation.

The US represents 70% of all Canadian lumber exports. Think about that for a second. The US is Canada’s largest trading partner.

This should create a lot of power on the side of the buyer of Canadian lumber, but it has not.

See why this is so damn important to Canada? I thought you would.

In the US, Canadian soft wood lumber is used for homebuilding. Homebuilding is a critical US industry.

The US and Canada have pretended to work on this problem with great earnestness since 1982 and there has been Lumber I, Lumber II, Lumber III, and Lumber IV agreements. [Not to go ugly on an ape, but the US gets its ass handed to it on these type of negotiations. President Trump is right about this. Even the Canadians are laughing at us.]

There were a number of other agreements, including NAFTA, which bore on the dispute. The most recent, The Softwood Lumber Agreement, expired in October 2015 and a one year moratorium expired in October of 2016 — three weeks before the US election.

The time to deal with this has just arrived. This is why the problem has materialized now. The agreements and a moratorium have all lapsed.

1. Countervailing duties imposed when a product’s costs are being manipulated by a supplier. This requires a complaint from more than 25% of the US industry for the government to act upon this concept. Done!

2. Anti-dumping duties imposed when a producer is selling goods below their cost to manufacture. This is the next step. [This is the basis for the US-China dispute on steel.]

Both of these notions are in play, but the Trump administration has struck using the countervailing duty approach by imposing tariffs of up to 24% on Canadian softwood exports.

This is no head fake. President Trump has done this. This is like when President hit Syria. It is done. Your move, Canada.

1. One of the things I am beginning to admire about President Trump is he doesn’t allow things to drift or follow inertia. He is a man of action.

His Commerce Secretary, Wilbur Ross, is a quick study and unafraid to act. Deal makers both, but no baloney guys both. Refreshing.

A long standing problem appears on his desk — immigration, the EPA, China, Syria, North Korea — he does something about it in real time. 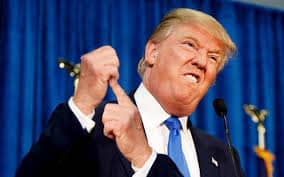 This guy. This no nonsense, pissed off guy. He’s the one shaking things up in the District of Columbia. Just like he promised he would.

The world is going to have to pay a price for access to the US market. [BTW, right now Canada has effectively banned US milk products. Huh? They get unfettered softwood lumber access to the US and the US milk industry takes a kick in the udder? No way, Jose.]

Well, that is until now. President Trump is not going to let diplomats and trade reps call the shots.

3. Hidden in the details is the issue of jobs. How about if all that Canadian lumber was replaced by US lumber?

There are more than 500,000 jobs — damn good paying jobs — at play here. Do not imagine for a second President Trump doesn’t see this?

One misstep by Canada and those jobs are going to Georgia, South Carolina, Florida.

4. There is no question the Canadian government and the provincial administrations are manipulating the price at which they sell standing timber to Canadian lumber companies.

It impacts their citizens (voters, y’all) and the local economy. It is real.

If you were running British Columbia, you wouldn’t put a thumb on the scale to keep happy voters? Haha, yes, you would, wouldn’t you? Cause you’d be a politician and that’s the kind of stuff politicians do, right?

5. The Canadian timber companies know this is coming. They have known this for years and they have acted upon that knowledge.

They have been on a ravenous binge to buy and start US sawmills. Some of these companies own more US sawmills than Canadian sawmills.

This is how America gets great again, no?

So, there you have it, dear reader. This is why the Trump admin is acting in regard to Canadian softwood lumber exports. It’s about agreements, timing, price manipulation, and cojones.

This is a good thing and I applaud President Trump for jumping into the middle of a centuries old problem. Bravo, Mr. President. You got my support.

But, hey, what the Hell do I really know anyway? I’m just a Big Red Car. President Trump — you’re doing great. Thank you.