In addition to UBI — Universal Basic Income, a monthly stipend of $1,000 per month — Dem candidate Andrew Yang has begun calling for something he calls “universal service.” 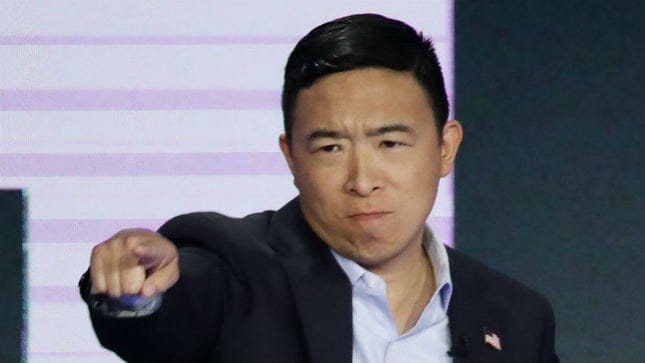 What I understand he is calling for is that each American set aside either two or three years for service to the country either after high school or after college.

Here is what I understand the program to be:

1. The year before you graduate from high school, you elect to either:

a. Dedicate two years in service to the Nation immediately upon graduation; or,

b. Delay your period of service until you graduate from college, whereafter you would serve three years in service to the Nation.

2. The service would be paid at the same rate as a private in the Army with an annual increase of five percent after the end of each year.

3. If you qualify as an officer after finishing college, you could test for a commission and you would be paid at the rate of a second lieutenant.

4. You could elect to serve in the following areas — subject to the needs of the Nation: the military, law enforcement, prisons, the Parks Service, FEMA (disaster relief), any school, any hospital, any senior living facility, any retirement facility, any municipally owned power plant, any recycling facility, any public dump, or any municipal roads maintenance effort.

In general, you would work for non-profits or local, county, state, or Federal government.

5. If you successfully complete your period of service, you either receive a reimbursement payment or a future credit for schooling at a public institution subject to the needs of the Nation. [If the Nation has a surplus of poets, you can’t study poetry with a stipend.]

6. If you are physically challenged, you would be assigned duties commensurate with your physical capabilities.

7. There would be no exemptions or delays.

8. Many jobs — such as working in the Federal parks — may physical relocation and rugged working conditions. As an example, one might work in northern parks during the summer, and southern parks during the winter. Parks work might include renovation or building hiking trails in remote areas. In this instance, the government will provide camp facilities, food, and recreation.

9. Five hours per week would be dedicated to learning life skills (such as financial skills, auto maintenance) and American history.

If you did not graduate from high school, you will obtain a GED (graduate equivalency degree) and this time will be added to your obligation.

10. There would be opportunities for leadership training as the service units would require member leadership. Leaders would receive higher compensation commensurate with their duties.

11. Any and all immigrants coming to the United States would have to serve similar time periods if they are younger than thirty years old.

13. Individuals will pay taxes on their income, but it will refunded if they obtain full time employment within ninety days of finishing the program.

That’s the plan in a nutshell.

What do you think, Big Red Car?

The Big Red Car was around when the Nation had an active draft. There were several good results of the draft:

1. Men had skin in the game because they were forced to serve for two years.

3. Persons from disparate parts of the country came into contact with their peers.

4. Social awareness and social changes were effected through mingling — the military was integrated before the general society of the country.

5. The professional military became sensitive to the citizenry and the citizenry became knowledgeable of the complications of running an effective military.

There were several bad results of the draft:

1. The power elite did not serve. Talking to you Bill Clinton, Donald Trump, Dick Cheney, and many others. The burden sharing was not equal.

2. Citizens were jerked out of their existence and required to serve whether they were inclined to do so or not.

3. There was wholesale and elitist gaming of the system.

Most of these bad results can be mitigated in the Andrew Yang program.

So, what do you think, Dear Readers?

I think we should give it a go.

But, hey, what the Hell do I really know anyway? I’m just a Big Red Car. Have a great week.

[You may check the Andrew Yang website and find that no such universal service program proposal actually exists. You may be confused. For this and other sins, I am truly sorry.

This entire construct is a figment of the Big Red Car’s imagination. I made it all up. But, you know that Andrew Yang could have thought this up.

The Nation desperately needs a program that will unite our young citizens, will give them a sense of common purpose, force them to throw some skin in the game, make them own our collective existence, that will provide enrichment as to the story of our country, that will ensure they know what country they live in, how it was founded, and why.

So, yes, the Big Red Car made it all up. But wouldn’t it be a great idea, Andrew?

Can you help a pal out, Andy? Yang Gang?]