I often wake up in the 3-4:00 AM time frame and lay in bed pondering the condition of the world. It is dark, quiet, and my mind is rested.

Today, I share some of my ponderizations (OK, it’s not really a word, but why not invent one we both understand?)

1. Is anybody in the United States looking at the freakin’ credit card?

Sometimes I look at the National Debt and other data at one of my favorite websites: 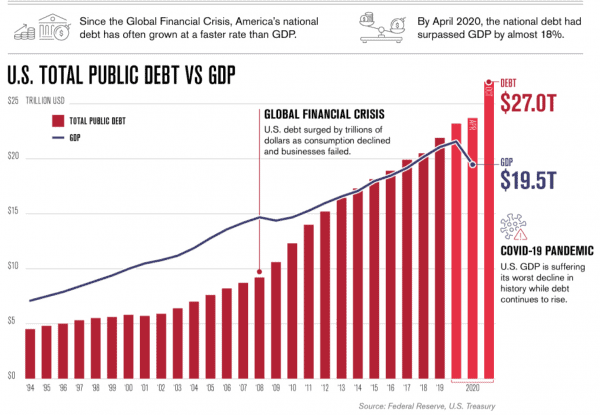 This chicken is coming home to roost, y’all.

2. Anybody paying attention to inflation?

Have you seen the price of gasoline is up by more than 50% — this is a tax on everything. This was totally unnecessary and was triggered by precipitous actions emanating from the White House.

The Fed does not have to look for inflation. It’s here already here and living in a two bedroom suite with two fireplaces at the Four Seasons hotel.

3. Are we keeping a weather eye on the Chinese from a military perspective?

The Chinese are negotiating to build a naval port — rearming and repair of Chinese Navy warships — on the west side of Africa (putting them in the Atlantic and threatening the US east coast) to complement the construction of a similar facility in the Pacific halfway between mainland China and Hawaii.

4. Can you believe the power of the public teachers’ unions?

They defy the power of the White House and the POTUS and say they will return to school whenever the Hell they want to. Boom.

How did they get all this power and why can’t we exert any reasonable influence on them? Private schools and Texas/Florida are back in school. Get with it.

We have raised a slice of American children whose education has been arrested for two years and who will have a difficult time jumpstarting the rest of their education.

5. Is anybody — talking adults here — looking at the size of the military?

We have abandoned our strategic commitment — fighting two full time, major wars simultaneously, both of which we win — to our global security. This happened during the Obama admin.

We need an active duty Army commitment of 1,000,000 soldiers given the global nature of the threat from China and Russia. We need Reserves/National Guard of the same size.

6. Is anybody thinking about what kind of summer we are going to have?

Talking ceaseless rioting, y’all. I predict one of the bloodiest and worst summers in US history.

This is the result of allowing leftist groups to riot unfettered (talking to you Antifa and BLM), allowing looting (which is even cheaper than Amazon though sometimes the selection is not as deep), and releasing felons rather than prosecuting them.

So, yes, let’s defund the police and watch those murder rates continue to rise.

7. Do you have any idea of how much Dark Money is loose in the American political system?

Dark Money is untraceable by design and can be used for any political issue — not “supposed” to be used for candidates, but we all know which candidate supports which issue, right?

A huge percentage of the current admin’s senior folks sat out the prior admin by working for some Dark Money cesspool. This is the Deep State civilianized and slapped with a very fat checkbook. It is mind boggling.

8. Anybody paying attention to earmarks which have made a comeback after being banned ten years ago?

First, they are no longer called “earmarks.” but rather they are called “Community Project Requests” which feels like a clean, warm kitten sleeping on your chest as you drink some lovely green tea with organic honey (all honey is organic) rather than a slab of nasty, smelly pork rotting in the sun.

The Dems in Congress — they control the House, the Senate, the White House and this is why earmarks are back — are pretending they will limit them to $14,000,000,000 annually. Please stop. I’m going to crack a rib laughing.

At that, I went back to sleep awaking at a decent hour with the sun rising in the east and warming our great country. Luckily, I did not ponder immigration or wokeness.

What keeps you up at night? Please share your ponderizations.