Big Red Care here.  What a day in the ATX.  Beautiful, sunny, dry and cool but just wait until that sun get high and it will be warm.  On Earth as it is in Texas, ya’ll.

So The Boss hates it when I write about political stuff but sometimes it has to be done.  Sorry, Boss.

When a new President takes over his predecessor leaves him a nice letter on his desk and then he gets his first Presidential Daily Brief.

The letter is sweet and tells the new guy — “hey, this is a tough job and you will need all of your wits to lead and succeed.”

In the bottom drawer of the Presidential Resolute Desk (that’s the desk that was a gift of the British and was made from timbers from HMS Resolute), the former President leaves a fat manual called “The Scapegoating Manual”. 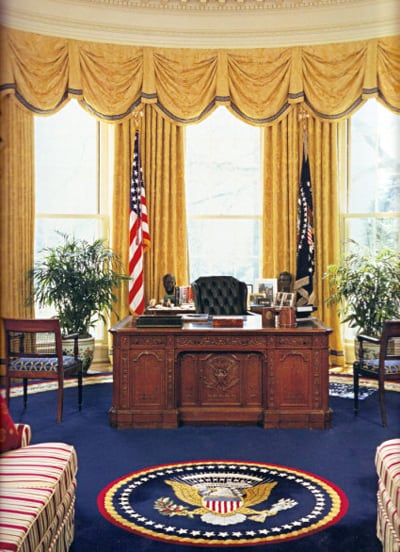 The Scapegoating Manual tells the President how to deal with scandals and other nonsense.

Each President adds a chapter or two to the manual and leaves The Scapegoating Manual in the bottom left hand drawer of the Resolute Desk for his successor.

It has become a tradition.

The Chapters and “lessons learned”

The Scapegoating Manual is divided into chapters explaining specific tactics and lessons learned.  Chapters and lessons learned are edited, modified and added by each President.  You will recognize many of them and why not?  They are on display all the time.

Here are some current chapters:

2.  When confronted by an awkward situation, learn to lie, lie, lie immediately.

Remember the White House Press Secretary has no chance of ever going to Heaven and thus instructing him to lie is not really a moral dilemma.  He has chosen this profession in much the same way that Michael Corleone chose his profession.

When current White House Press Secretary Jay Carney said that the White House changed only one word in the infamous Benghazi talking points — well this chapter was the operative direction.  And he will likely burn in Hell.

3.  When the President is directly confronted with an awkward situation, deny, deny, deny.

President Clinton added this chapter though it had originally been sketched in back in the Reagan administration in a couple of references to the Iran-Contra episode.

4.  When you are caught, make a great big theatrical denial and then say — “…and now we need to get back to work…”.

This may not actually carry the day but it is very big news and the public loves it when the President gets really pissed off.  It looks like leadership.  Forceful leadership and that’s like freakin’ catnip, don’t you know?

Do you remember when President Clinton, looking fiercely into the camera with face all aglow with outrage, wagged his finger and famously stated:  “I did not have sexual relations with that woman………Miss Lewinski.”  Uhhh, well technically he did not, because as we later learned oral sex is not sex after all.  Who knew?  Try selling that concept to your spouse.  [Hey, Big Red Car, get it back on the high ground here and now.  Ooops, sorry.]

Is this a Hall of Shame moment or what?

Or when President Obama chivalrously rose to the defense of UN Ambassador Rice as if the press and the public were picking on her for having carried his water and told his big lies about the video nonsense about  Benghazi?  I particularly loved how he attempted to reward her with an appointment as Secretary of State.  It was charming.  Classy.

Or when Secretary of State Hilary Clinton lambasted the Congressional hearing about Benghazi — “What difference does it make?”  [First Ladies apparently get a peek at The Scapegoating Manual from time to time.  She learned the lessons well, no?]

4.  If things really get rough, throw someone under the bus and say bad things about them.  Blame them completely.

You can also substitute an entire department of government — like the CIA — and say they sure messed up, didn’t they?  [Pro tip:  Be careful about messing with the CIA as they have a lot of ways to return the favor as will likely become evident in the current l’affaire Benghazi.  These are rough fellows and they will repay the favor.]

USMC Lt Col Oliver North famously leapt under the bus on Iran-Contra thereby protecting President Reagan.  Ollie North took the blame for everything.  He got his Class A’s on with all of his ribbons and went and jousted with the Congress and thereby diverted all the attention from the White House. 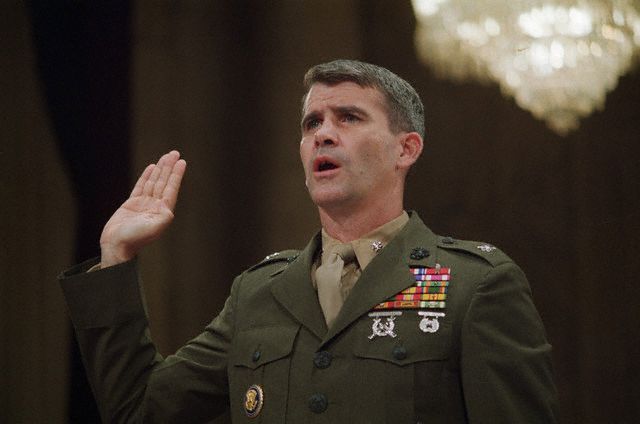 Why the Hell do you think they keep USMC Lt Colonels in the White House in the first place?  To throw under buses when the feathers hit the fan.

5.  When things really start to get rough, the President can pull out those old reliables:

“That’s old news.”  As if dead Ambassadors age well and the seriousness dissipates with the passage of time.

“That issue has been completely investigated by my cousin, Joe, and the findings were published and even though others did stuff that was not quite right (eating shellfish with the wrong fork or white wine with meat primarily), I personally have no blame.”  This is the “commission a study” footnote.

6.  The Stalingrad defense is to blame it all on partisan politics and get your party faithful to come to your rescue in the press.  Spend a lot of time saying stuff to the media and on the Sunday morning talk shows [sometimes confused with the press department of a particular political party].  Hey, this works.

7.  Then, of course, there is the “sluts and nuts” defense and undermining of any credible source who appears to indict your explanations even if, well, they were actually there at the event in real time.  “Disgruntled, political hack, unsubstantiated, slut, bald headed, not credible…”  You get the idea.

8.  Then the President can “wag the dog” and take America’s eye off the ball by say — bombing another country or raising some enormous  legislative smoke screen to divert attention.

9.  The final tactic is to just go the North Carolina Four Corner defense and play out the clock because those elections will be over soon enough and the public will lose its enthusiasm.  And, you can escape any day of reckoning if you can just keep the ball out of the hands of your enemies by failing to produce documents and pleading executive privilege and traveling a lot to foreign countries which do not have a free press.

10.  As the final, final tactic, the President can just look at the “free” press which serves the truth here in the United States and say:  “Hey, you got my back on this shit or not?”  And, yes, they will have his back unless they are Fox News or have a contract up for renewal or their ratings are suffering.

So now you know all about The Scapegoating Manual and when you are clinging to your guns and God and watching the news [wink, wink], you will be able to keep score at home and know — “Hey, honey, it’s the “sluts and nuts” defense.  Haha.  That damn Big Red Car called it right.  Haha.  Damn, Big Red Car, you know your stuff.”

But, hey, what the Hell do I know anyway?  I’m just a Big Red Car but I do know one thing — we deserve better than this.  We deserve the truth.

4 thoughts on “The Scapegoating Manual”