Big Red Car here on a grayish morning, but it will burn off soon. So, I’m looking at a study with alarming results.

Out of 1,000 persons surveyed only ONE was able to name the five rights protected by the First Amendment to the United States Constitution. Worse still, 40% of the respondents could not mention a single right. 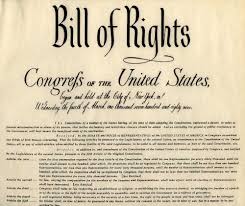 The first ten amendments to the US Constitution are contained in a document called the Bill of Rights.

How is that possible?

Take a second, can you name any of the rights protected by the First Amendment?

Congress shall make no law respecting an establishment of religion, or prohibiting the free exercise thereof; or abridging the freedom of speech, or of the press; or the right of the people peaceably to assemble, and to petition the Government for a redress of grievances.

It is a single sentence long.

In the vernacular, the five rights are described as:

We are ignorant of our own founding document, the US Constitution.

But, hey, what the Hell do I really know anyway? I’m just a Big Red Car, but I know the five rights of the First Amendment. Do you? Yes you do, now. Have a great week, y’all.