I was blessed to have a wonderful father who shaped me and made me into a young man, but he then sent me to Virginia Military Institute to finish off the job.

I was lucky. I was studying civil engineering and my faculty advisor was Colonel Donald K Jamison.

Colonel Jamison was a civil engineering professor for 40 years, the Department Head for much of that time, the tennis coach, and a mentor (faculty advisor) to a series of very lucky cadets.

He was a friendly face, a port in a storm, but a man who treated you like a man.

We used to get our grades six times per semester during our Rat year. The first time I got a grade in calculus, I got an F.

I had to report to Colonel Jamison to review my grades. All of my grades were good, except for calculus. I just didn’t get calculus. I was trying, but it just wasn’t sinking into my head.

“You’re going home and you’ll never be a civil engineer, won’t get an Army commission if you fail Rat calculus.”

Those were the words he delivered to me. He didn’t raise his voice, didn’t scold me. He just laid out what was going to happen.

The draft was on in those days and it meant something else — being drafted when my student status was removed.

I got some help in calculus — assisted by my first class dyke (mentor) who got someone to work with me — and I figured it out in a week. I finished the semester with an A. Once I figured it out, it was easy.

I ended that year #1 in the class academically, which was one Hell of a surprise to me.

“I knew you’d figure it out,” Colonel Jamison said, when I brought him my final grades (which was at the beginning of my second year).

Colonel Jamison inspired confidence in a wiseass 18-year-old who needed that kind of inspiration. After that, I knew what I was capable of and performed at that level.

About fifteen years ago, I wrote Colonel Jamison a letter thanking him for the interest he had taken in me. He remembered every element of my cadetship including an odd discussion as to whether I should jump from the fourth stoop into the laundry truck that was located in the archway four floors below.

Thank you, Colonel Donald K Jamison for all you did for me. Thank you, VMI, for having attracted such rare men of talent, character, and commitment. This is the secret sauce of VMI.

There are few institutions left in America that teach, develop character. VMI continues to be one of them.

So, a pal of mine asked me, “What has shaped your life? Where are you from?”

We were drinking coffee, I swear. He was also a trade school grad (what one calls a fellow military school graduate).

So, I said, “I won the lottery on parents — both of my parents were World War II veterans — and I went to Virginia Military Institute.”

Come graduation, there will be far fewer graduates than when you matriculated. It is not for everybody and not everybody can make it. It is a stern, unforgiving test and if you graduate you will know that you have accomplished something hard. That hardness will be in you.

You will never have an association as that of your Brother Rats — men who have been through the same furnace and emerged intact.

It all starts right here. From this point on, VMI owns your butt. I was the first Rat — the lovely term they use to refer to freshmen after they shave your head — in my class to “sign the book.”

This is also your last look when you leave. It will still be there fifty year later when you come for your 50th Reunion.

END_OF_DOCUMENT_TOKEN_TO_BE_REPLACED

I have been fortunate in life. I have enjoyed the tutelage of extraordinary teachers and had the example of great men starting with my father.

One of those men was the boxing coach at my alma mater, Virginia Military Institute. Every cadet took Rat (freshman) boxing. I hate to admit I enjoyed it, though I did bleed more than a little. You will note that the boxers are not wearing headgear. Coach King did not fool around.

The man on the right is Coach Clark King. This picture was taken a few years before I matriculated at VMI, but it could have been my class. That’s exactly the way we looked.

Coach King taught you technique, how to land a punch, how to take a punch, but he taught us all something more — he taught us how to be men, to defend ourselves in a hard world. The Vietnam War was going on at the time.

What I did not know was that Colonel King was a World War II Marine and had been awarded the Silver Star for heroism at Iwo Jima as a Second Lieutenant, platoon commander. The attached citation tells the story.

These are the kind of men who taught us back in the 1960s. The kind of men who formed us and fired us in a hot furnace called The Virginia Military Institute. I am happy to report that the same transformation is underway as we speak. One of my Brother Rats is the President of the Board of Visitors. The school is run by an incredibly competent leader, General Peay. It is an infinitely better school than when I matriculated.

I am eternally grateful to these men and to my father who nudged me in that direction. [Thanks to fellow alumnus Dee Shannon, for the Citation for Clark King’s Silver Star.]

Real men. I am proud to have been in their company.

END_OF_DOCUMENT_TOKEN_TO_BE_REPLACED END_OF_DOCUMENT_TOKEN_TO_BE_REPLACED

My favorite thing was the VMI (Virginia Military Institute) cadets, 1,500 strong, bringing up the rear of the parade. Saving the best for last in the their red caped overcoats with white crossed dykes, armed & dangerous.

This picture captures the Corps of Cadets waiting to be turned loose to march down the parade route toward the White House.

Imagine yourself amongst them. Waiting in anticipation having gotten up well before dawn and riding a bus to DC. Standing there with your M-14 and bayonet in your heavy overcoat with the blood red cape, talking to your classmates. Waiting to be a part of history you will remember for the rest of your life. Proud to be a VMI cadet and proud to be an American taking part in the peaceful transition of power which is America. 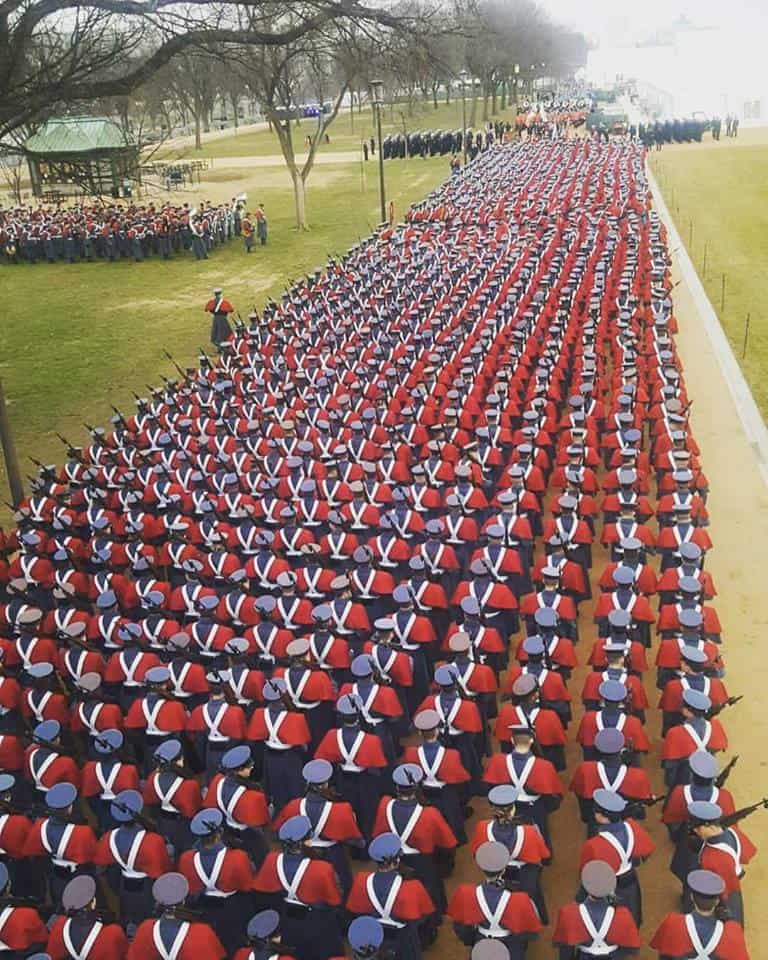 END_OF_DOCUMENT_TOKEN_TO_BE_REPLACED

Big Red Car here on a grayish and muggy Veteran’s Day in the ATX.

There are three things about 11 November that are important.

First, it is Veteran’s Day. Second, Virginia Military Institute and Austin, Texas were both founded on 11 Novemberr 1839.

That is the trifecta! END_OF_DOCUMENT_TOKEN_TO_BE_REPLACED

Big Red Car here.  Ahh, did you get outside yesterday?  Perfect temperature and a Mediterranean quality to the sky and light.  AWESOME!

On Earth as it is in ATX.