Shut up and start peddling, y’all, I’m as serious as avoiding a heart attack.

So, the Big Red Car likes Peleton for the diversity of its income. It generates sales income – the one off sale of a Peleton bike or treadmill – and monthly recurring revenue with a monthly membership. It also finances the sale of the bike or treadmill at 0% interest while upselling you on shoes, weights, headphones, heart monitors, bike mat, water bottles. 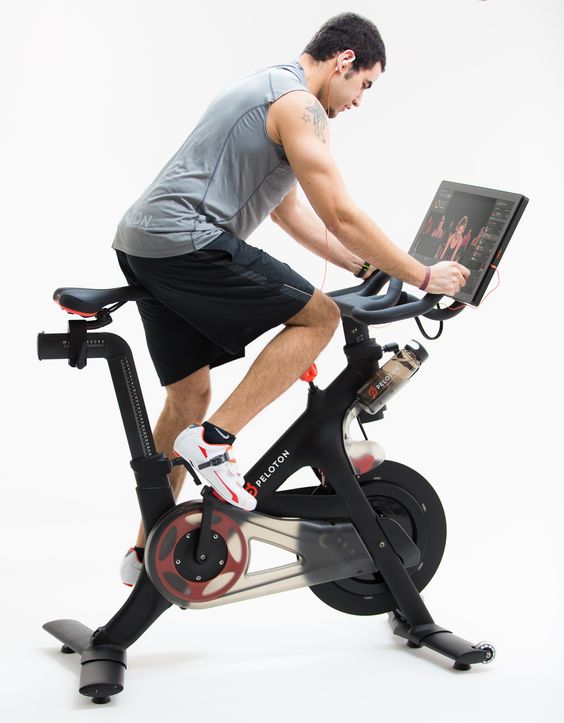 Where’s the bike mat and why aren’t you dressed like Lance Armstrong?

Who is Peleton, Big Red Car?

John Foley was a manufacturing engineer who transitioned into a digital business guy with stints at CitySearch.com, Evite.com (CEO), Pronto.com (Co-founder, CEO), and Barnesandnoble.com (President, Father of the Nook).

On a personal basis, he was a serial entrepreneur and an avid competitive cyclist and tri-athlete. He describes himself as an “addict” of “boutique group fitness classes.” You can take it from there.

The big takeaway for the Big Red Car is the confluence of three things – manufacturing engineer, all-around digital commerce guy, and a fitness addict who saw the subscription income value of classes. Perfect storm.

The company has raised $994MM of funding starting with a $400K angel seed round in February 2012. Part of the seed round was from Bullish, a very interesting company.

Peleton did a Kickstarter campaign which raised $400,000 in November 2014. It just closed a 2 August 2018 injection of $550MM bringing it to that total of $994MM. (Seems like a lot of money for a company this close to an IPO.) The company says it will be its “last” round of funding with an IPO targeted for next year.

This is a very traditional growth funding pattern from seed to A-F rounds with a Kickstarter in the middle of things. Well played.

Go to CrunchBase and study their funding pattern and the logical suspects who participated.

What is Peleton, Big Red Car?

Peleton is a first rate exercise bike (they make treadmills now, also) coupled with a monitor Internet connection to a series of exercise classes, which in the safety and comfort of your home puts you in a boutique exercise class. They used to run a ton of ads, so maybe you’ve seen them on the telly?

They sell you the bike for $2245 to $2644 – the difference being shoes, weights, headphones, heart rate monitor, bike mat, and water bottles. They will set the exercise bike up as part of the price. You can make payments over 39 months at 0% interest.

You pay a monthly membership fee of $39/month. This is the subscription income component of their revenue model.

You attend as many classes as you want, some from a library and some beamed out from a central cycling studio. In this way, they create a networked community.

The reason the Peleton story is of interest to your Big Red Car is that the company has taken a fairly commodity business – exercise equipment – and has created a monthly subscription source of revenue.

Remember we talked about the nature of pricing and revenue using Rent the Runway as our exemplar here.

They, Peleton, have also created a cult-like atmosphere – all crazy successful digital companies become some kind of cult – around what might become a daily exercise regimen.

Big takeaway – one off retail income plus monthly subscription income in a cult like atmosphere with a networked community. Bingo!

So, dear reader, there you have it. Can you find a way to create monthly subscription revenue? If so, you may become a unicorn.

But, hey, what the Hell do I really know anyway? I’m just a Big Red Car. Be kind to yourself and your loved ones cause the world is awash with mean.