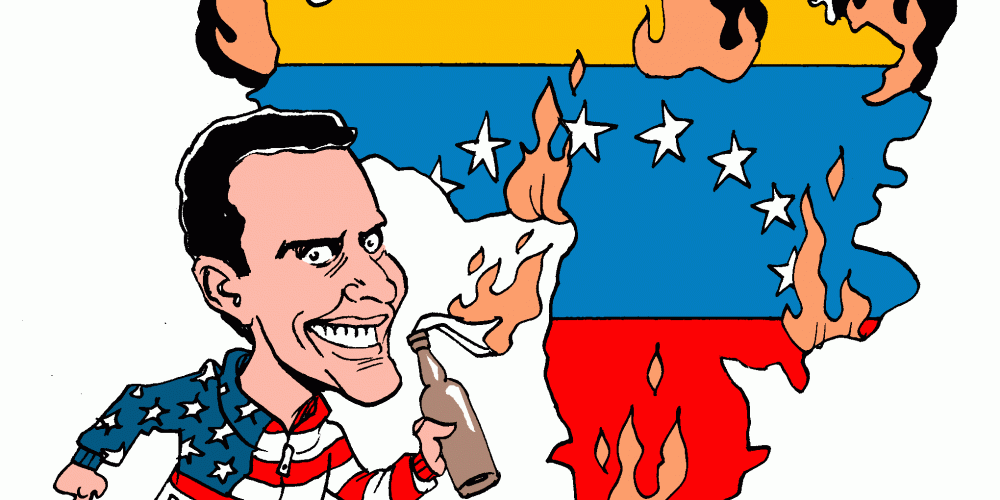 In March, President Rafael Caldera releases Chavez from prison, discharges the charges, and kicks Chavez and the other co-conspirators out of the military.

Chavez, with nothing else to do, launches a political career promising to find a “third way” somewhere between capitalism and socialism. He is not able to articulate what that way is, but he is elected President in December.

In July the country elects Chavez supported candidates to 122 of the 128 seats in the Assembly. Chavez uses this support to re-write the Constitution of Venezuela, to eliminate the Senate, to make the Presidential term six years, and to rename the country: “Bolivarian Republic of Venezuela.” Bolivar was a revolutionary who inspired the independence of many South American and Latin American countries from Spain.

In April, business leaders and the military attempt a coup against the Chavez government that ends in failure. The George W Bush White House announced its public support for the coup plotters. This, understandably, puts the Chavez regime at odds with the United States.

The unrest continues with the unions, business leaders, and workers at the state run oil company, PDVSA, demanding a referendum on Chavez and whether he should be turned out of office. The protests last two months. The PDVSA workers engage in a formal strike.

Chavez settles scores and fires the senior executives of PDVSA, replacing them with his cronies. He also dismisses 18,000 PDVSA workers throwing them into poverty. He now has control of the economy and the largest generator of cash flow.

In December, while trolling for love, Chavez signs a cooperation agreement with Fidel Castro and his Cuban Communist country that forms a bloc of socialist, Communist, leftist countries — all with anti-American sentiments — that includes Bolivia, Ecuador, and Nicaragua.

Chavez gives a speech to the United Nations General Assembly in September 2006 in which he insults the American President (George W Bush) on American soil, calling him the Devil. The USA had already invaded Iraq and Chavez was afraid of a similar invasion.

Chavez stands for and prevails in a re-election campaign putting his tenure at 12 years. He feels like he is at the peak of his personal power and lays grandiose plans to unify all of Latin America behind him and against the USA.

Chavez convinces his General Assembly (controlled by his supporters and with the Senate disbanded) to grant him formal and sweeping powers to govern by decree meaning he no longer has to bother to engage in the charade of passing laws.

The price of oil is $100/barrel which allows Chavez to fund enormous anti-poverty programs to buy the support of the populace. The program unleashes monumental corruption. The country will be in real trouble when the price of oil plummets, as it will.

Chavez eliminates Venezuela’s oldest television station, Radio Caracas Television, because it criticizes him, by failing to renew its broadcast license. This is the beginning of a systematic purge of media outlets critical of the Chavez regime.

Chavez sends the US Ambassador home on a trumped up charge of supporting a plot against his government. He sends observers and researchers from Human Rights Watch home as they are reporting on government abuses and murder.

In June, Chavez goes to Cuba for surgery to remove an abscess on his pelvis that is found to be cancerous.

In September, Chavez announces he has successfully beaten cancer with chemo.

In October when Libya’s Colonel Muammar Gaddafi is killed, Chavez praises the Libyan dictator as a “liberator” and a “martyr.”

In October, Chavez announces he is “cancer free” and wins another re-election. It is not clear why there was an election for a President-For-Life.

In December, Chavez says the cancer has returned, that his Vice President Nicolas Maduro — a former bus driver and union tough — is to be his successor.

Chavez returns to Cuba for more surgery and is never seen in public again.

In March, Chavez is dead. Maduro is sworn in as the interim President. At the Chavez funeral, the Iranian President, Mahmoud Ahmadinejad, kisses Chavez’ coffin.

In April, Maduro barely defeats Henrique Capriles in a rigged campaign that is fought out with Maduro using the state-owned-and-controlled media to trash his opponent.

An organization identified as the National Electoral Council promises a “full audit” that never materializes.

In February, students begin protests against violent crime that morph into general anti-government protests when the government uses force — killing dozens of protesters — to crush the protesters.

Prominent politicians call for the Maduro government to step down in peaceful protests. Maduro had them locked up and they remain behind bars five years later.

The United Nations publishes its annual homicide report indicating that the 15 years of Chavez have made Venezuela into an ultra-violent country in which it is not safe to be out in broad daylight.

Venezuela is the second most violent nation on the planet. It had once been one of the safest. Much of the violence is from government-supported-or-tolerated gangs and the government itself.

In September, inflation settles in at 60% while the price of oil declines. Maduro threatens a Harvard professor who hints that Venezuela may not be able to make timely payments on its national debt, potentially resulting in a financial default and ensuing bankruptcy.

In November, we learn that the country with the world’s largest reserves of crude is importing crude oil for the first time in its history. This is the most significant, discrete economic bit of data documenting Venezuela’s fall from wealth and prosperity.

In December, the Obama administration punishes Venezuela for its bad actions by freezing US assets of government officials and denying them travel visas to the US.

In January, the government announces that the “official” rate of inflation is now pegged at 64%. In addition, the country is running out of food, water, electricity while shoppers are forbidden to line up overnight at grocery stores to get food.

In February, the Maduro government devalues the Venezuelan currency, the Bolivar, by 69%. He tries to obscure this by suggesting that the US is getting ready to bomb his Presidential palace. Meanwhile, he approves new decrees allowing the military to fire on peaceful protests.

Maduro limits the number of US diplomats in his country and labels President Bush and Senator Rubio as “terrorists” unable to receive travel visas.

By some miracle, the opposition party, the Democratic Unity, gains control of the National Assembly — the first time since the first Chavez election. They ride to victory on a tsunami of rising inflation, plummeting oil prices, unemployment, lack of food (water and electricity), government violence, and popular discontent.

The Venezuelan Supreme Court announces it is taking over the functions of the National Assembly (remember they are now controlled by the opposition), but walks ti back after riots ending with more than 100 dead.

Anyone who can afford to leave the country emigrates. More than 5 million persons leave in the Bolivarian Disaspora, the largest wave of emigration in the Western Hemisphere in history. This is more than 15% of the population and triggers a refugee crisis in neighboring countries.

Discussions between the government and its opponents breakdown and it is decided to call another election.

In May, Maduro wins an easy re-election amid low-turnout (voters were afraid to vote) and massive voter fraud including vote buying. Neighboring countries, the US, the European Union, and the National Assembly refuse to recognize the results of the election, leaving Venezuela without a President in their view.

In January, Maduro self-inaugurates himself to a six-year term.

Under the current Constitution, the National Assembly declares that their leader, Juan Guaido, is the interim President of Venezuela until another legal election can be held. President Guaido is recognized by the US, the European Union, and many Latin American countries a the legal leader of Venezuela.

In twenty years, Venezuela is transformed from the richest country in South America to a basket case. It took twenty years.

No discussion of anything related to Venezuela would be complete without including the roles of Russian and China.

Venezuela has been the beneficiary of numerous loans from both countries.

The Russian loans ($4Bn) have been used to buy Russian weapons and systems. Venezuela is Russia’s largest customer.

China — 500,000 Chinese live in Venezuela — is focused on the energy industry. There are two problems:

1. Venezuelan crude is heavy and sulfurous; China doesn’t currently have a refinery capable of handling it. They are supposedly building one.

2.The oil tankers used to/from Venezuela are too big to go through the Panama Canal and would have to traverse the Cape of Good Hope.

In the end, China is well-secured on its loans as it can extract oil in payment. I think Russia is screwed.

Both Russia and China see the Venezuela situation as means of pricking the USA in their hemisphere.

So, dear reader, there you have it — riches to rags in twenty years with a lot of help from Venezuela’s socialist and Communist friends.

But, hey, what the Hell do I really know anyway? I’m just a Big Red Car. Have a great weekend.