Big Red Car here.  Well the rain has stopped but it’s going to be a cool and humid day in the ATX.  Hey, we like cool in July and who doesn’t?

So The Boss is out early this morning but no work for a Big Red Car.  The Boss won’t take a Big Red Car along unless there is sunshine in the forecast.

Speaking of sunshine, let me blow a bit of sunshine up your skirt this morning.  Welcome to Saudi Texas!

Oil production in Texas is on a roll.  Look at this graph, ya’ll. 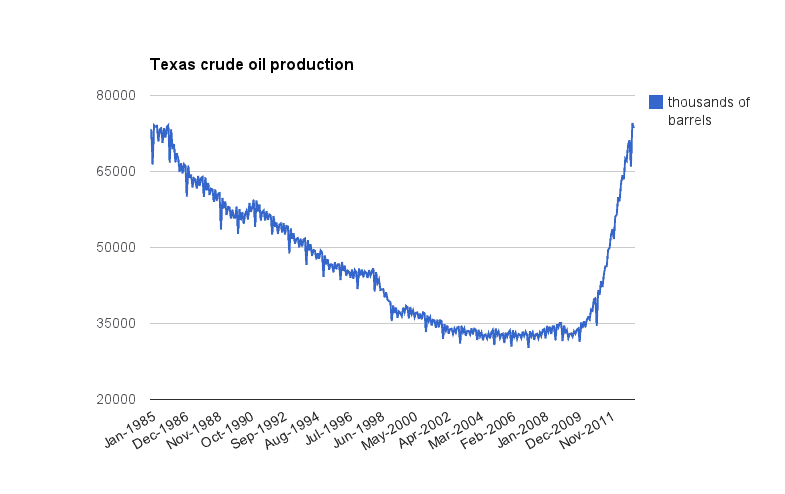 This has several very positive implications.

1.  Texas oil production is increasing to levels not seen since the mid-1980s creating wealth, jobs, tax revenue and economic vigor.

2.  The jobs related to the energy industry are great jobs.  High paying jobs.  Bureau of Labor Statistics reports that average Texas Oil Patch jobs earn $112,000 annually v $47,000 statewide for all of Texas.  These are damn good jobs and these are 2011 numbers.

3.  Texas Oil Patch jobs have a FOUR times multiplier increasing the demand for all other support services.  This is a huge shot in the arm for local economies.

Of course, you know that Texas has a balanced budget and actually saves a bit of money in the short term annually.  Wow, how can Texas do that and the United States can’t?  It’s called governing philosophy, Old Sport.  Texas has a conservative view of thangs and well, those jack offs in Washington, the District of Columbia, are profligate drunken spenders.  Crack head spenders.

But, hey, what the Hell do I know anyway?  I’m just a Big Red Car but I live in Texas where we’re creating wealth and jobs.  Damn good high paying jobs!  On Earth as it is in Saudi Texas!