Today is Pearl Harbor Day, which President Franklin Roosevelt called, “a date which will live in infamy.”

The Empire of Japan unleashed an hours long sneak attack on the American fleet at Pearl Harbor, Hawaii in the early morning hours of a Sunday morning.

It was a devastating attack. One of the main targets of the attack was Battleship Row whereat the Japs sunk, destroyed, or damaged:

The battleship Nevada — managed to get underway, beached itself to avoid clogging up the main entrance to Pearl, sunk, decommissioned in 1946, shipped to Bikini Atoll as a target ship for nuclear weapons tests, sunk by Naval gunfire in 1948;

The battleship Pennsylvania — damaged by bombs while in drydock, returned to service March 1942;

The battleship Tennessee — minor damage, repaired and returned to the fleet in February 1942;

The battleship Utah — capsized, never repaired, remains at Pearl Harbor (the Utah is often overlooked as it was not moored on Battleship Row, but was at anchor off Ford Island after returning to Pearl afollowing gunnery exercises); and, 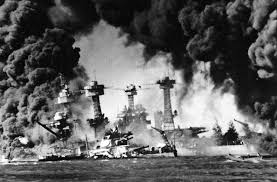 In all, the Japs sunk or damaged the battleships above, three cruisers, three destroyers, an anti-aircraft training ship, and one minelayer. One hundred and eighty-eight US planes were destroyed on the island’s airfields while 2,403 Americans were KIA and 1,178 were WIA. The Japs did not touch the American aircraft carrier fleet as they were at sea. It was the only good luck for the Americans that day.

The Japs attacked Pearl Harbor to prevent the US fleet from interfering in their plans to attack the Philippines, Guam, Wake Island, Malaya, Singapore, and Hong Kong. That same day, the Japs attacked all of those locations.

In the first wave at Pearl, the Japs hit American airfields at Hickham Field, Wheeler Field, Ford Island, Kanoehe Naval Air Station, Bellows Field, and Ewa Marine Corps Station. The Americans were caught sleeping on Sunday morning and the Japs seized air superiority in the first minutes of the attack.

Naval Marshal General (Admiral) Isorokyu Yamamoto is alleged to have said, “I feel all we have done is to awaken a sleeping giant and fill him with a terrible resolve.”

Son of a bitch was right.

The second is that the Greatest Generation dropped their plows, picked up their rifles, and beat the crap out of the Germans and Japs. The Japanese surrender took place on the USS Missouri.

It is important that we never forget what happened at Pearl Harbor on 7 December 1941, that we remember who we are — the nation (with our Allies) who defeated evil. This is who America is. We are a bulwark against unbridled evil.