The Boss got a lot of emails on a couple of the Old Economy to New Economy Transformation posts.  One in particular wanted to explore in a bit more depth the issue of how to determine where the Old Economy company was in regard to its market reputation.

The Boss had already shown a bit of that but here is some additional information.

If you look carefully at this original work of art — The Boss keeps a big sketch pad, think it’s newsprint actually, and a good cross section of Sharpies handy to convert his thoughts into pictures.  The pictures become words and then I steal it all and tell ya’ll.  Oh, Big Red Car, you clever and sly old dog. 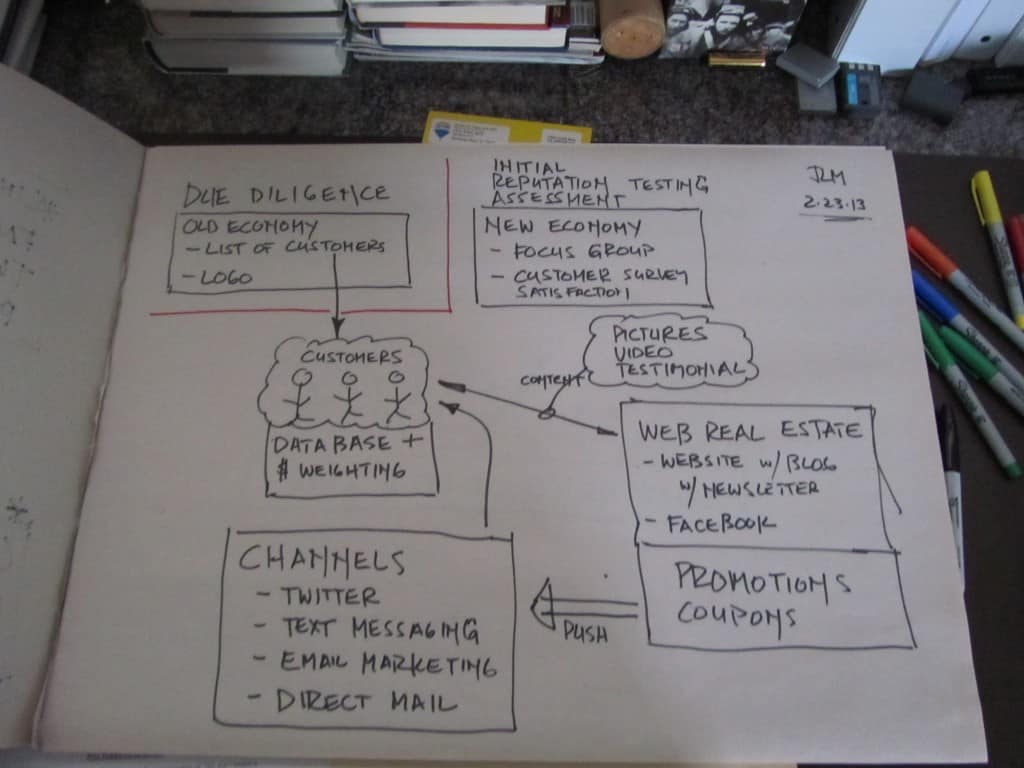 If you look in the center at the top, you will see the words “Initial Reputation Testing Assessment”.  That is what we want to focus on here.  Click on the picture to see it at a much bigger scale.

One of the first things the buyer of the Old Economy wants to do — perhaps during the due diligence period — is to assess:

1.  “Exactly what is the reputation of this Old Economy company?  Bit of probing about its management would not hurt.”

2.  “What is the reputation of its product, service or history?”

4.  “Do we, perhaps, have some real brand equity in that there is a lot of goodwill attached to this company?”

So how are we going to do that?

First, go back and look at the earlier post on this subject.  Look here. <<< link  Take a look at the discussion on the focus group mechanics and the customer satisfaction survey.  Now, do them both.

If you add detailed interviews of the existing marketing staff, a look at how many loyal customers the company has plus the focus group and the customer satisfaction survey — you have completed the basic information gathering to be able to arrive at some preliminary conclusions.

Bad news is that often the assessment is not consistent and may be contradictory across all the data inputs.  Sometimes ,sure it IS conflicting or inconsistent.

The Boss once bought an Old Economy company which had a sterling — absolutely sterling — reputation except it was universally thought to be “very expensive” and the management was considered “at times to be difficult to deal with”.  Hmmm, what is one to do?

Think hard about what you have discovered?

Are these huge selling points — sometimes the information is overwhelmingly positive — hey, it could happen says the Big Red Card!  Haha

Are the shortcomings things that can be overcome by making some small changes?

Are some of the criticisms just part of that industry — that’s what The Boss concluded in the case of the “very expensive” issue above.

You can analyze until paralysis sets in but you have to take action.

Determine what actions you are going to take, write them down and move on.

Check, double check, re-check with someone whose opinion you respect if you smoke out BIG problems but otherwise know this — Old Economy companies ARE always going to have a few flaws which only sweetens the deal if you can overcome and fix them.

Sure, all Old Economy companies come with a few flaws, that’s what “opportunity” looks like.

Identify them, decide how you can fix them, commit to a plan and move on to the next steps.

Oh yeah, I forgot the most important thing:  PRICE THEM INTO THE DEAL!

You can do it.