Big Red Car here after an extensive journey to Savannah, Charlotte, Charleston, Folly Beach, Savannah, and points in between. There is nothing like a good summer road trip, y’all. Ahhhh, the South in the summer time. The beaches. The sun. The food. There are few food cities as spectacular as Charleston.

This got me thinking about how using a bit of tech can teach an old dog a new trick.

As I was thinking about that, I stumbled on an experiment which was conducted by a couple of Chick-Fil-A owners using a devise called a “Kallpod.” 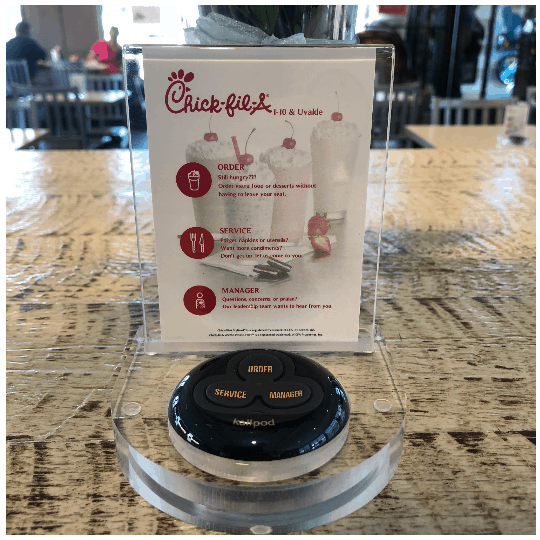 This application is in Uvalde on Interstate 10 on the way to West Texas.

I find Chick-Fil-A to be an interesting company. Private. Closed on Sundays. Strong fundamentals – blocking and tackling. Extraordinary quality and staffing and, now, experimenting with Kallpod.

Bottom line – using this device increased sales 500% at the #2 CFA in the US. That’s what got my attention. <<< I don’t believe the 500% sales increase number. Doesn’t sound possible.

What is a Kallpod, Big Red Car?

I am discussing this solely in the CFA application. It is a device which is placed on a CFA table and has three buttons to summon Service, the Manager, or to Order food.

There are a number of other applications, but this is how the device was used by the Chick-Fil-A in Wallisville, Texas (just off Interstate Highway 10, east of Houston, driven by it a million times).

The device harnesses personal service and allows a customer to sort out their order – correct an error – and to add to their order without having to brave the line at the point-of-sale. Re-entering the fast food line to order more food is a substantial barrier.

The Wallisville, Texas Chick-Fil-A is reported to have 4,000 customers a day – astride Interstate Highway 10, I can believe that.

Gross revenue is supposedly $10,000,000 annually. Having a hard time swallowing that.

Previously, they were using employees with iPads circulating in both the drive-in lines and within the restaurant itself.

Most of the second orders are for things like ice cream or a milkshake. They have really good peach milkshakes.

Chick-Fil-A does not have ordering kiosks (talking about you, Mr. McDonald) and considers its hands-on, high-quality staff to be part of its secret sauce. I agree with that based on personal experience.

The use of iPads in the drive-in lanes is fairly widespread.

The use of Kallpods is brand new and if the sales numbers are even remotely correct, wow!

Here is a link for you to study Kallpods.

I hope you are having a great summer. If not, get with it. But, hey, what the Hell do I know anyway? I’m just a Big Red Car. Have a great weekend. Do something nice for yourself. You deserve it.