Big Red Car here on a lovely Saturday morning back from blueberry pancakes at the Counter Cafe, y’all. Is this a great country or what?

So, I have been following the continuing saga with North Korea and their de-nuclearization. The story continues.

Let’s update it a bit, shall we? 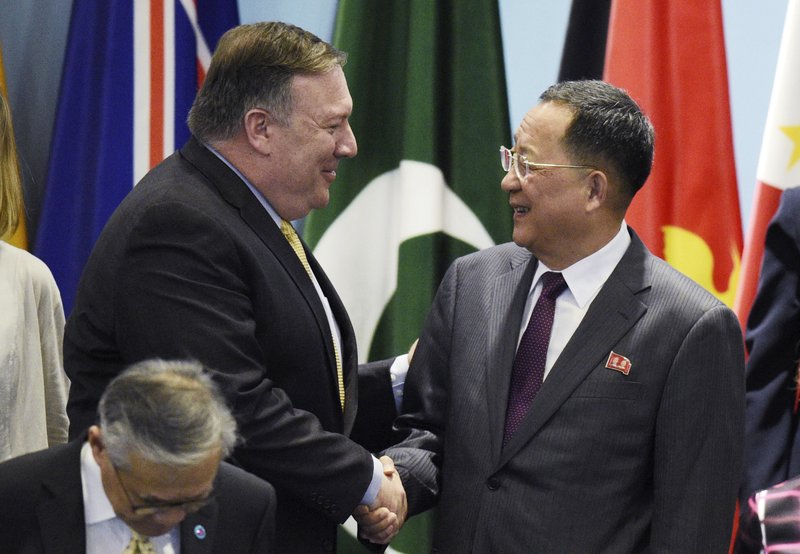 US Secretary of State Pompeo meeting with North Korean Foreign Minister Ri Yong Ho in Singapore at the ASEAN Conference. I think our guy can take him.

What a difference a year makes

Prior to the meeting Chairman Kim had sent a personal letter to President Trump. At the conference, President Trump’s personal response to the Kim letter was delivered by the Americans to the North Koreans.

Since the negotiations have been conducted, North Korea has taken some actions:

3. North Korea has begun to repatriate the remains of American soldiers killed in North Korea during the Korean War.

4. North Korea has begun to attend direct talks with the United States.

5. North Korea has not conducted any bomb tests or missile tests for the last 10 months.

There are some issues:

2. Russia continues to conduct ship-to-ship transfers of oil and coal at sea.

4.  The North Korean Foreign Minister delivered a diatribe against the United States at the ASEAN Conference for approaching the negotiations poorly and decrying the US failure to “boost confidence.”

Let me translate that “boost confidence” baloney – the North Koreans want the US to relax sanctions and to lead an effort at the United Nations to relax UN sanctions. Good luck with that, North Korea. Not going to happen.

This is standard North Korean baloney wanting Christmas to come early because they played nice for a short period of time. Not going to happen, y’all.

The North Koreans are going to try to play the US. That’s their modus operandi. Always has been. They are very close to being broke. Now is not the time to relax sanctions. They are working. Big league!

They picked the wrong boy to play in President Trump.

The North Koreans have their 70th anniversary of their founding coming up in September. The US has discouraged other countries from sending a delegation. This pisses the NKs off.

We are looking at a 4-5 year process with Kim’s bunch. Progress will be slow. There will rough spots along the way. The US is not going to relax those sanctions until NK is denuclearized. In the mean time, President Trump will attempt to use his charm to influence the process.

Russia could be very helpful, but right now, they are a major league pain in the ass.

China has been a little more helpful, but could do a lot more.

We are playing 4-dimension chess here. It will be a multi-touch process.