The uranium sale sets us up for the core issue — different administrations have a different view as to what constitutes a national security issue.

If different administrations have different views of what constitutes a national security issue, then it is highly likely that they will make different decisions even when the facts are the exact same.

National security is always, by definition, going to involve our adversaries, chief amongst them will be Russia, China, North Korea, Venezuela, Cuba, and Iran.

Comes hither now the issue of the proposed 40-year lease of the Port of Long Beach container terminal to a Chinese company.

The Port of Long Beach is America’s second largest container port, handling more than $194B a year in trade. It is a deepwater port that can handle the world’s largest vessels (post-Panamax ships) — not every port can.

The Port of Long Beach serves 140 shipping lines that connect to more than 215 other seaports around the globe. The port is 3,200 acres with 31 miles of waterfront, 10 pier dockages, 62 individual slips, and 68 container cranes capable of handling post-Panamax (Panama Canal expansion bigger ships) cargoes. In 2018, it handled more than 8,000,000 containers, its busiest year ever.

The Chinese set up shop and controlled the second largest US shipping terminal in the US. And the Obama admin approved it!

When the Trump admin came into office, they looked at this cozy arrangement and said, “What? We leased the second largest container handling port to the Red Chinese in the person of a Hong Kong based company? Is this smart? Isn’t this a threat to our national security? Won’t we need that facility in the event of a war against, say, the Chinese?”

The Trump admin decided it wasn’t smart, so they put pressure on the Chinese company to dispose of the leasehold arrangement. 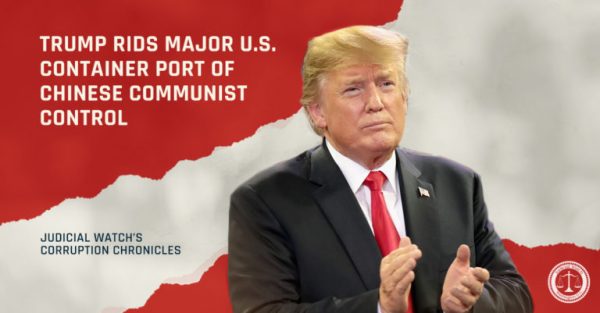 A shotgun marriage was made between the Red Chinese and an Australian shipping company, Macquarie Infrastructure Partners. This deal ended the Chinese control of the Port of Long Beach container shipping terminal and alleviated a national security risk that the Trump admin found unacceptable, but the Obama administration was fine with.

So, dear reader, there are other examples of stupid deals that threaten our national security. Shall I list a few?

1. We approved the sale of 20% of the US supply source of uranium to a Russian company. Is this smart? No.

2. We let our NATO allies stiff us by failing to pay their fair share of the defense costs for Europe for years and years. President Trump cracked the whip and NATO is close to being funded as agreed in the Atlantic Charter.

3. Germany, NATO member, entered into a natural gas pipeline deal with the most likely European adversary, Russia. In the event of a war, do you see any scenario in which Russia does not turn off the tap for Germany and Europe?

The Germans have put Europe’s head into a noose that is held by Moscow. Not smart.

4. The USA pulls out of the Iran nuke deal because we don’t see how it prevents a clear path to a Iranian nuke — wouldn’t that be a good idea?

Then, our European allies work directly with the Iranians to try to find a loophole or a way around American sanctions.

I shall retire from the fray here. What I want you to know is that there is a tricky, clever world out there and that the US has to constantly be on its toes to ensure we don’t compromise our own national security with stupid business deals. Be vigilant, America. Do not fashion our own noose.

We need to make certain that we have continuity between administrations and ensure we don’t miss these conflicts.