By way of introduction, here is Mayor Pete and his husband, Chasten. 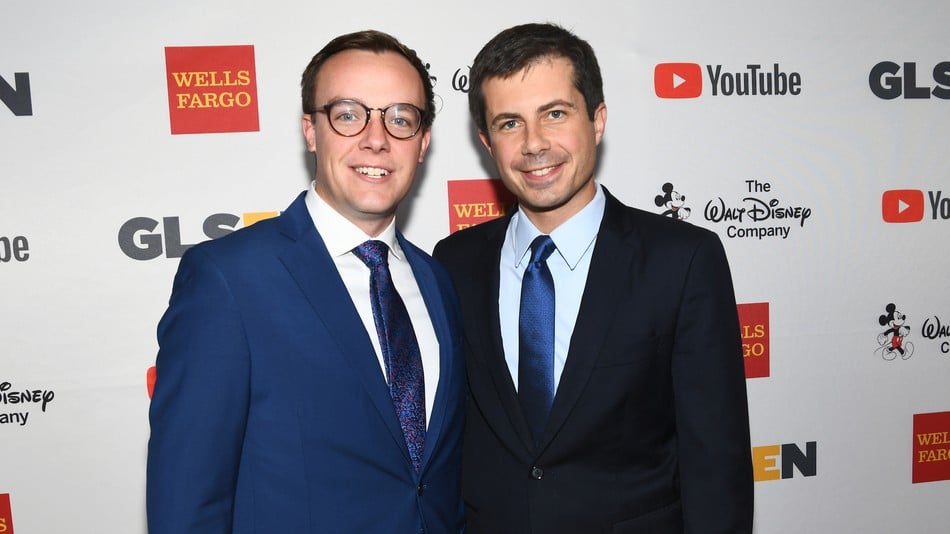 Here is Beto in his “thoughtful” pose. What is going on in there?

Robert Francis O’Rourke — Beto (46) — El Paso, Texas self-described businessman, musician, and politican — is a Columbia University grad by way of Woodberry Forest School. At Columbia, he was the co-captain of the heavyweight rowing crew (perhaps the only time he was ever called a “heavyweight”?).

He is a former El Paso City Council member and a three time Congressman who sponsored a single bill that was ever passed into law in three terms.

He ran unsuccessfully for Senator from Texas succumbing to the considerable charms of Senator Ted Cruz. Raised a boat load of money from out of state, but in a Presidential election, that money is going to be spread around.

His parents are Notre Dame University profs. He was elected and re-elected the Mayor of South Bend. He worked for McKinsey & Co. He served eight years in the Naval Reserve deploying for seven months to Afghanistan (which doesn’t have a coast line). Did I mention he was married to Chasten, his husband. Guy took Buttigieg’s name. What does that tell you? Nothing.

On the issues there is no daylight between Beto and Mayor Pete. Pretty standard Dem2020 fare. You could insert the name of any Dem candidate and the description would be the same. Let’s go through the issues anyway.

Medicare for all? Check

Mayor Pete is more articulate on the subject — as he is on all subjects — saying the fight is over health care equity, lower drug prices, long term affordable care, more resources for mental health, go to war over opioids and methamphetamine, and a larger investment in maternal and infant health.

Both steer clear of Obamacare.

More money for teachers because NEA is a big voting bloc.

[May want to chat with Nancy Pelosi and Chuck Schumer who just punted on all of that when they had a $2T commitment from the White House in hand.]

Interestingly enough neither have a refined thought on race other than trying to buy black votes with reparations.

Both are very white guys and have virtually ZERO support from black voters. In a recent South Carolina poll, they both literally polled ZERO.

As a gay man with a cool husband named Chasten, you would think that Mayor Pete would be all over this. He wants pay transparency, approval of the Equal Right Amendment, more protections for gender and sexual identity-based discrimination, and more of the same for pregnant women

Mayor Pete wants you to know that it is “above his pay grade” if you disagree with him about anything and you better tread carefully cause he is full on gay, married, has a husband, and is in love.

Beto, quick with an apology when pressed, apologized for making a joke that his wife raised their kids. Meaning the nanny she hired raised his kids. Truth.

Mayor Pete, of course, is deathly concerned about Chasten getting pregnant, so he is on top of this, safe sex and all that — both want to be able to eliminate nuisance babies until they learn to read

Serious point — the ghoulishness associated with wanting to kill babies until the day before little tykes are out of the womb is a huge step backward from the traditional “rare, safe, legal; no third trimester abortions” stance of the Dems, but it is not just Beto and Mayor P; it is all the Dem candidates.

National polling on this is 72% opposed, so I am very surprised. Major problem for the Dems.

Both want a renewed Wagner Act, code for, “We will do whatever the unions want. Y’all have the money and we want it.”

Union rank-and-file at an all time disconnect from the Bosses.

Reverse the military transgender prohibition, make sure that every voter knows that Mayor Pete is a gay, married guy, with a husband, and is in love with him — Chasten, talking to you, dude. Crank up the Instagram.

OK, yeah, that Green New Deal thing. Let’s “decarbonize” the fuck out of everything, lots of insulation, trains are bad, abandon ICE (haha, not that ICE, the internal combustion engine, dummy), get back into the Paris Climate Agreement and start sending checks to the world, and let’s, just generally, be Green AF.

Move along, we have nothing to say on foreign policy other than “Can’t we all just get along?”

No wall. No freakin’ wall even if 10,000,000 “refugees” flee to the US as long as they have a pathway to citizenship and register with the Dem party as voters. Ten year proxy for us to vote their vote, would not be a bad idea.

Tear down the existing walls. Put in slip and slides.

BTW, what is MS-13 and why do people speak so ugly about them.

“Make every city a sanctuary.”

No guns. Take away your guns. Stomp out the NRA.

WTF is the Second Amendment good for? Did the Founding Fathers have tanks? No.

More immigrants, more Dem voters, should be able to vote if you pinky swear you’re a voter.

You can inherit a dead person’s property, right? So, why can’t you inherit his vote? It’s not a dead person voting. It’s his heir.

$15/hr minimum wage and who cares how many fast food restaurants close cause we don’t like fast food anyway. Except when we’ve been smoking a lot of legal weed. Then, we need fast food.

Let all prisoners vote even if they killed people. If they killed three victims, maybe they get four votes — three for their victims and one for them. Have to vote Dem.

That First Step Act — signature legislation signed and spawned by President Trump — yeah, we like that. We want the credit for it.

Didn’t the Trump admin solve all those problems? Why do these guys want to be treated as well as illegal immigrants?

WTF did they do to earn that kind of consideration? Did they cross the Rio Grande? No.

What is the difference between Memorial Day and Veterans Day?

“Let us get back to you once we see how the Census2020 treats us in California, New York, Illinois, Florida. Then, we’ll know what we hate that the Republicans are doing.”

Cause they would be a welcome addition to our democracy. Can the Dem Party just appoint them since they’re going to be Dems anyway?

“Hey, how would Guam vote?”

Close down the Electoral College? Check

The Dems, Hillary Clinton, would have won the Presidency if the pesky Electoral College hadn’t been in session.

Let’s focus on the desires of California and New York and Illinois rather than that Electoral College thing.

Look, we need more people on the Supreme Court cause who ever thought President Trump would keep THAT promise? Two conservatives and RBG with a nasty head cold?

If a Dem is elected, let’s expand it to, say, fifteen members? For efficiency, let’s have the new Dem President nominate the newbies right away. Problem solved.

And, there you have it, not a bit of daylight between Beto and Mayor Pete.

Mayor Pete speaks in complete sentences, full paragraphs, you can track the idea from the thesis paragraph to the conclusion. Beto? Not so much. Lots of great emoting and hand signals.

Beto will hop up on a table and flail away in a New York minute while Mayor Pete will “above my paygrade” you in the same time period. Of course, Mayor Pete was actually in the service, though many question whether the US Navy is a military organization and what they were doing in Afghanistan, a country with no coastline.

Just when you think Beto is going to run the table in the dog stakes, you find out that Mayor Pete and Chasten have not just one, but two dogs. 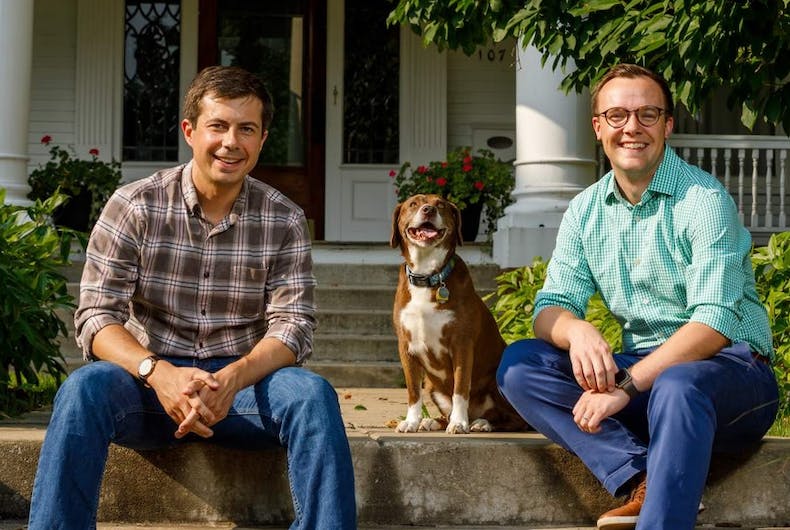 Chasten posted an Insta saying, “Want dogs? We got dogs. Not sure, but I think the little bitch is gay. How cool is that?”

OK, we’ve got all out war with President Donald J Trump. Check.

Neither Beto nor Mayor Pete have journeymanlike nicknames from the President. Could be a huge PR disaster.

Not a good sign that there are no nicknames. Get it that “Beto” and “Mayor Pete” may be enough for President Trump, but still who doesn’t want a Trump nickname?

OK, if someone hired FusionGPS and said, “Dig me some dirt, like the Dirty Dossier, on these two,” what would they find?

1. Beto has the whole — why is a 4th generation, full-blooded Irish boy from El Paso calling himself “Beto?”

2. Beto was in a rock and roll band, wore some dresses, smoked some weed, got arrested a couple of times and tried to flee the scene of a DUI. MADD will not like that.

3. Beto’s wife is the daughter of a mega-rich real estate guy from New Mexico. Loaded.

4. Beto has never really passed any legislation during three terms in Congress. Though he does have a cool pickup. May only be relevant in Texas.

5. The “gay, married Mayor with the husband” thing is not going to work in the black community as evidenced by the South Carolina polls showing ZERO support.

Pretty predictable and thin gruel, sayeth your Big Red Car. But, remember, FusionGPS hasn’t even begun to invent shit yet. Give them time.

OK, here it is — Mayor Pete in a TKO over Beto. Not even close. “Sell By Date” expiration on lightweight Beto. Mayor Pete flavor-o-the-month.

Beto is yesterday. Mayor Pete is, literally, tomorrow. Will he break through during the debates? Yes.

Will Mayor Pete be on the dais come the Dem convention? No. Sorry. It will be Biden-Harris2020. Biden will not rough Mayor Pete up.

Mayor Pete will say, “If you are looking to solve a problem of today, why would you look to the past? That’s where the fucking problem and Joe Biden both came from.”

Biden will say, “I’d like to take that little shit behind the gym and smell his hair. Great hair. Wait. Can I even say that?”

So, there you have it. Mayor Pete bitch smacks Beto. Mayor Pete will not win the nomination, but he is going to be a force when he has a few more years on him.