Big Red Car here, y’all. Beautiful Thanksgiving in the ATX and why not? We’ve got a lot to be thankful in Texas and, in particular, Austin.

Not so much in Ferguson, so today, let’s cut the crap on Ferguson and discuss a few hard truths. What say you?

The Big Red Car says: “Let’s put our worse angels on the unemployment line for a change. Let’s deal with reality and fix this thing.”

Mark Twain said: “Get your facts first, then you can distort them as much as you please.”

In Ferguson, nobody waited to get the facts straight until they began to make utterances and pronouncements that were driven by emotion, confirmation biases, personal prejudices and mischief.

When the autopsies were finished — the facts that Mark Twain was urging initial consideration of, no doubt — and the evidence was presented to the grand jury, hard truths began to emerge. These truths indict many of the initial utterances and pronouncements because they are based on facts, rational facts — rather than emotion, confirmation bias, personal prejudice or mischief.

How we form our opinions and make our decisions

We poor humans [sayeth the Big Red Car who is, after all, a freakin’ piece of metal with a brain] make our decisions and form our opinions in the following manners:

1. Rationally – wherein we calmly evaluate facts and base our decisions and opinions solely on rational thought and critical thinking. MIA in Ferguson generally.

2. Emotionally – wherein we attach emotion to our decisions and opinions including letting our instincts hold sway, at times, over our rational thinking. Big dose of this in Ferguson.

3. With prejudice – wherein we follow our already formed ideas not allowing new facts or emotions or thoughts to influence our already established prejudices (good or bad); or,

4. Confirming our biases — wherein we have previously engaged in critical thinking and now are marshaling and listening only to the facts that confirm our already established biases.

In most instances, some combination of these approaches is found in all of our opinions and decisions. We are not single cell brain organisms and thus our views are not linear, single point views.

We also evolve over time and what we thought last week may be influenced by what we learned yesterday and therefore what we think tomorrow will evolve and incorporate the new learnings. People can change their views on things because, hopefully, they never stop critically thinking about things. If we fail to learn, we will not overcome this. But we are learners, aren’t we?

In the Ferguson matter, let’s first strip back some of the nonsense. Santa Claus is a fraud and Mike Brown was not an altar boy. [Knee jerk political correctness reaction alert: No, he did not deserve to die but he had a very big hand in determining his own fate.]

Mike Brown was a bully. He was a thug. He was a drug abuser. He was a criminal. He was a thief. He was not an angel. He was a young man wandering down a path that ended where many such lost young men arrive: the graveyard. These facts, all of which pre-date his fateful encounter with Officer Wilson, must be evaluated and critically evaluated if you truthfully want to answer the question: “How did this happen?”

It happened, in part, because Mike Brown was already on a path that is documented to arrive at a fateful destination: TROUBLE. Mike Brown was headed toward trouble and there was no force in his life nudging him in a better direction.

Was he a product of a failure of effective parenting? This argument can be made.

The initial story as to the events which were initiated by Mike Brown and into which Officer Darren Wilson was drawn and in which Officer Wilson played such a critical part was a lie. It did not happen the way the initial witnesses suggested — fabricated is a better and more accurate description.

The media created a frenzy which was not based on facts, truth, rational thought or critical thinking. It was based on emotion, prejudices and confirmation bias. It was an entire system run amok not a single incident. It was symptomatic of a nation wide problem not a bad ten minutes on a road in a small town in Missouri. It was the entire world focused on the one foot between Mike Brown and Officer Darren Wilson. It was none of these things.

It was the misfortune of life which brought a thug into contact with the barrel of a gun held by a cop trying to do his duty as he had sworn an oath to do and then the director said: “Action!” What happened next was a tragedy when viewed from every camera angle but it was not what we were told by the media and the initial witnesses.

The media wanted a certain story and they delivered that story with reckless disregard for the truth. The truth of the matter did not emerge until ballistics, physical evidence, autopsy reports, reliable witnesses were in hand. But the media did not want that story — they wanted a story of a white police officer executing a black teen (sainted black teen would work even better, how about a “gentle giant”?) while callously acting as judge, jury and executioner.

One watching the interview of Officer Darren Wilson is hard pressed to find the judge, jury and executioner in that young man. Scared cop? Yes. Thoughtful kid? Yes. Young man who knew his difficult duty and acted thereon? Yes. Still — guy trying to do a very tough job in a very tough set of circumstances who tried to do his duty to the best of his ability. Do not applaud this young man, his life is changed forever.

Death was not the only outcome available here and a bit of luck could have had a better final result. But that did not happen and we are left only with what did happen.

There is a huge difference between racial awareness and racism. Racial awareness tells us some interesting things — a black kid doesn’t get treated well by white cops — about ourselves and what we can work on and improve. Are these things true? Yes, unfortunately. We are not a perfect people, white or black.

Racism is a real force. We can deal with that. We can be, individually, the change we want to see. One by one.

Racebaiting in which the Al Sharptons, the Jesse Jacksons, the Eric Holders, the Barack Obamas tell us that everything that ever goes wrong between a black person and a white person has at its core racism is not a service to our nation. It has all become so predictable and out of proportion that one could simply mention a topic and predict with great accuracy the utterings of these fools.

The arrival of the racebaiters signals the start of the racial feeding frenzy which destroys any rational dialogue and potential for bridging the racial divide.

It is further exposed when such racial focus is not found when the victim is white and the perpetrator or alleged perpetrator is black. Why?

Why aren’t the Sharptons, the Jacksons, the Holders, the Obamas when the white victims are being buried? It doesn’t serve their racebaiting objectives?

In the entire Ferguson incident the violence, the destruction, the looters are neither part of the debate nor part of the solution. They are simply criminals and should be treated as such.

Burning down a black owned business which employs black men and women in a black neighborhood is not a transcendental thought which advances the debate, exposes the work that needs to be done or advances the creation of solutions to anything.

Look in this picture and show me the peacemakers, the thought leaders, the persons of goodwill, the community stalwarts — look carefully as the frame is filled with thugs and criminals. This is what I’m talking about. Much of what has happened in Ferguson is this and this is not right. 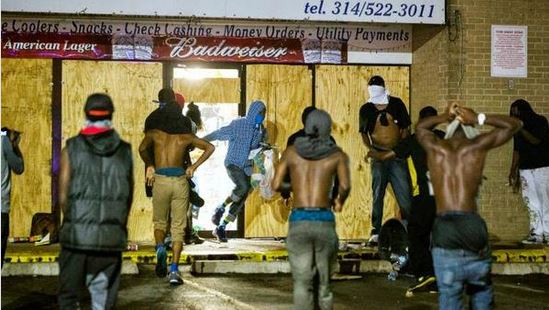 It is just thuggish behavior. The fact that in the Ferguson context this looting is being done by black youth only serves to justify the hardening views of those who would push back against the racial implications and the racebaiters and justify progressively more harsh reactions. It pushes us further apart at the time we need to come together. It certainly does not showcase black youth as victims but rather justifies a view of black youth as the problem. How many Mike Browns do you see in this picture? How many headstones waiting to be planted? How many parenting failures? Look carefully.

Fire is the Devil’s best friend and when businesses are torched to make a statement, the statement that is made is — evil is alive and well in Ferguson, Missouri. The Devil is laughing. The Devil is rejoicing. 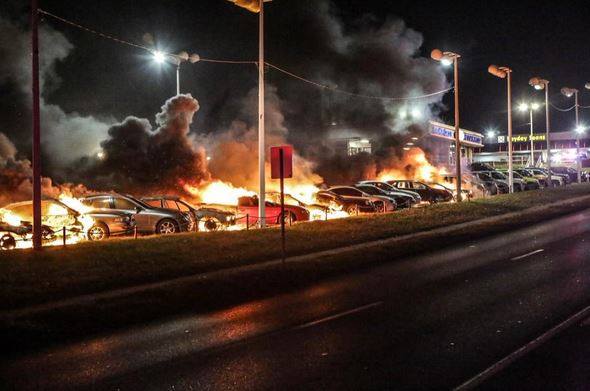 A car dealership offering its wares to customers of all kinds displaying its inventory is not a statement about l’affaire Ferguson. It is an inanimate and emotionless display of commerce. Torching it is an unspeakable act of intellectually bankrupt violence and exerts a financial penalty upon everyone. It is nonsense.

Having tried to cut the crap about the Ferguson incident, let’s take a second to frame practical solutions.

1. Local police departments should seek to reflect the racial makeup of their service areas to the extent possible without sacrificing standards.

2. Let’s focus  on the quality of parenting so that the next Mike Brown — the Mike Browns in the picture above perhaps — can be nudged off the path to the graveyard before it is too late. Let’s yell at parents, not at each other. Let’s get kids so involved and so tired they have no time or space for mischief. Let’s bring them closer to their own spirituality rather than letting them hang with the Devil.

3. Let’s get the American economy going so that the black community is focused on what great job to take rather than what to do with idle hands. Let’s fight in the market place not on the streets. Get opportunity to move into these urban zip codes and take root.

4. Let’s tell the racebaiters to go fuck themselves because  we are about “real” and we won’t let them draw us into conflict which perpetuates stereotypes and draws us apart. We are Americans and we can do anything we resolve to do.

If you show up only after the blood is in the streets, you will be too late. We will fix our problems before our children are bleeding. We do not need you and we do not want you. We want our children to live, prosper and raise even better children.

If you want to find some meaning in the death of Mike Brown then let it be this — we listened to the clarion call and we came together and we acted. We stopped the hating and we began to act from love. We acknowledged that we are not perfect but we weren’t afraid to strive for perfection and we never gave up. Will you do your part? Please?

Let’s make our worse angels be on unemployment for a change.

But, hey, what the Hell do I really know anyway? I’m, just a Big Red Car. Happy Thanksgiving and pass the damn 10W40, burp!

2 thoughts on “Let’s Cut The Crap on Ferguson”