ISIS was an offshoot of the failed SOFA (status of forces agreement) negotiations which made the US presence in Iraq disappear. It was a huge policy failure and in its vacuum, ISIS came to life.

[Note: The US has SOFAs with every country in which it stations troops. One may argue that Germany has not started any wars recently (since 1939) because the US and its allies have occupied it under a SOFA. We have similar arrangements with Korea, Japan, and lots of other countries. The failure to obtain one in Iraq was a monumental cockup.]

We were blindsided by our opposition to Assad in Syria. It was the right policy to oppose Assad, but we armed rebels who turned out to also be former Al Qaeda and, then, morphed into ISIS. [The accusations that the US created ISIS are based on this dopey alchemy.]

The Caliphate and the Caliph

ISIS anointed itself as a caliphate, the multi-ethnic, trans-national empire of Islam. Its leader, the Caliph, is Abu Bakr al-Baghdadi. 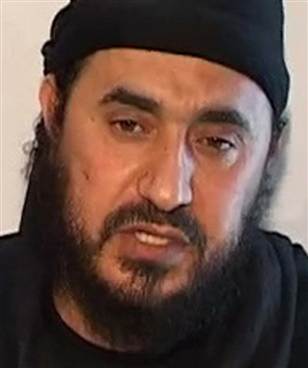 Meet Abu Bakr al-Baghdadi, the Caliph of ISIS. One of the biggest assholes and evil men in the history of the world.

Take note of the “al-Baghdadi” geographical claim. ISIS intended to occupy, physically, a crescent from the Med to Iran with a huge swath of Syria and Iraq in the borders. He was going to conquer Iraq and be headquartered in Baghdad.

The Caliph and ISIS enjoyed immediate success. How this handful of dirtbags were able to rout a 900,000 man US-trained, well-equipped Iraqi army is one of the mysteries of the world. In any event, they began to capture cities which had been freed from Saddam Hussein’s brutality with American blood, treasure, and lives.

The Iraqi army ran like cowards and left their weapons behind.

ISIS funded itself through the illegal sale of crude oil and refined products. It was on a sounder financial footing than the deficit ridden United States.

On the heels of this initial success, the Obama administration began to bring the situation into focus.

ISIS garnered even more attention with the export of its terrorism throughout the world.

Donald J Trump ran on a platform of “bombing the shit out of ISIS.” He won.

Like a dog who caught a pickup, he was left with the big question — “OK, what do we do now?”

He made several important policy decisions. When you make leadership changes, policy follows in the same vein.

As our new leader, here are some of the policy changes President Trump made:

No more focus on social engineering in the military petri dish. A new focus on lethality and dealing with ISIS.

Change the leadership, change the outcomes — throughout the organization.

3. The US began to add heavy artillery (same approach as they took with the Northern Alliance v the Taliban in Afghanistan in the beginning of that war), Special Operators for training and leadership, and fulfilled the campaign promise of “bombing the shit out of ISIS.”

American sorties were magnified by a 10X factor and no planes returned with their bombs because they had primary, secondary, tertiary targets.

4. US policy began to focus on doubling down on those who could fight and win — the Kurdish Peshmerga, as an example. Winners received priority of support and supply.

5. The US urged our allies to go after cities and wrest them from ISIS even when the fighting was bloody.

The US made a ring of steel around each of these beleaguered cities and made ISIS starve — for men, medical treatment, food, water, ammunition, and communications.

What happened then, Big Red Car?

Watching an army being defeated has several obvious symptoms. ISIS began to show the signs of a defeated army.

1. ISIS began to lose battles on the battlefield and were defeated through superior combined arms — infantry, artillery, armor, air power. The friendlies began to fight a more complex and deadly form of combat.

2. The enhanced and magnified bombing began to take a toll on communications, the movement of supplies, the safety of the ISIS leadership, the evacuation of wounded and KIAs, and the ability to convert oil into cash.

The bombing turned off the flow of cash to ISIS while destroying refineries, pipelines, trucks, bridges essential to movement, and roads. Anything moving died.

3. ISIS struggled to make up manpower losses. The recruiting triumph of ISIS was always baloney, but it became virtually impossible to obtain, transport, train, and deploy replacements.

When you begin to make pyramids of your enemies’ heads, recruitment will suffer.

When you take out their Intenet/social media center, the WWW stops quivering with your messages. You look like a loser.

4. ISIS could not take care of their wounded. It takes more people to care for a wounded soldier than to feed a live one.

ISIS could not get their wounded from the battlefield and into hospitals. They could not obtain critical medical supplies. This drove the morale of the field organizations into the ground.

5. ISIS could not supply their fighters with replacement leaders, food, water, medical supplies, and ammunition. The units began to lose cohesion and were no longer combat effective.

6. Graves registration broke down and the victors found themselves burying ISIS dead using dozers to dig large holes and push bodies into them before covering them up.

When the unit leaders give up, the followers follow their leaders.

8. ISIS has lost the high ground on the battlefield of social media.

We finally knocked out their favorite Internet cafes and drove them off the web.

9. The ISIS leadership has fled to the Euphrates River valley and is awaiting their own demise.

There is no caliphate. There is no glorious conquering of the Middle East. The caliph is MIA and the allies are about to call it a day when they kill al-Baghdadi.

10. ISIS has lost its nominal capital in Raqqa. When you lose your capital, it is a very bad thing in reality and symbolically.

There is more work to be done, but the outcome is now pre-ordained. ISIS is done.

Here’s what will happen next.

1. Al-Baghdadi will get nabbed like Saddam Hussein and Osama bin Laden.

If he is lucky, he will be killed. The propaganda value of holding a trial would be enormous.

2. ISIS will attempt to metastasize and infect the rest of the world. This is well underway.

It will slowly peter out as governments hunt them down and kill them. We have passed the highwater mark.

3. Iran’s influence in the Middle East will be enormous. They will control Iran, influence Iraq, and operate in Syria with impunity.

Iran will be the new problem for the US and Israel. The mischief will really start when Iran has a toehold on the Syrian-Israeli border to go with their support of Hamas and Hezbollah.

This is where the next war starts in the Middle East.

4. Syria, Bashar al-Assad, will not change much. He is a wholly owned subsidiary of the Russians and Iran. Putin loves the ability to use Syria as a wedge issue with the US. Loves it.

5. The Kurds will get some small autonomy, but still be hunted by Iraq, Iran, Turkey, and Syria. They deserve their own nation, but the world will not rise to the opportunity. The Kurds get screwed again.

6. In two years, there will be another crop of shitheads who are encouraged to come forward. With the ISIS experience under our belt, we need to throttle them in their crib.

But, hey, what the Hell do I know anyway? I’m just a Big Red Car. Be good to yourself.