Big Red Car here going international on y’all. Today, we discuss what the Hell is going on in Iran.

To refresh your memory, on 14 July 2015, the US and others (Russia, China, England, France, Germany) entered into the Iranian nuke deal (Joint Comprehensive Plan of Action) with the objective of halting Iran’s lurch toward becoming a nuclear power. Many say the agreement was flawed. Haha, sorry.

The plan was not approved by the Senate, as is required of binding American treaties, for the obvious reason that the Senate would not have approved it.

Candidate Trump campaigned on the promise of pulling the US out of the JCPA and on 13 October 2017 the US – at President Trump’s direction – did not make the required “certification” to continue the deal.

Subsequently, the US and Israel revealed that Iran had failed to disclose a past covert nuclear weapons development program as required by the original 2015 agreement. Oooops! 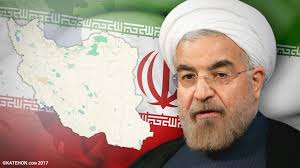 “OK, so I forgot to tell y’all about that silly covert nuke program. So what? Can you please send me a few more billion US dollars and Swiss francs? I have bills to pay. Would I lie to y’all? Damn I miss President Obama.”

On 8 May 2018, President Trump fulfilled his campaign promise by withdrawing the US from the agreement and promising to re-impose US economic sanctions against Iran.

The August sanctions focus on automobiles, gold, and precious metals.

The November sanctions focus on energy and banking.

The world will be forced to pick whether to do business with the $20T US economy or the $393B Iranian economy. That’s $20 TRILLION v $393 BILLION. Hmmm, what will the world do?

Already, substantial joint ventures in Iran have been cancelled and companies are pulling up stake and leaving.

The Iranians, of course, have responded with bluster and belligerent utterances about kicking the US’ ass.

So what happened to Iran, Big Red?

Their economy has responded with a slide in the value of the Iranian currency, the rial. 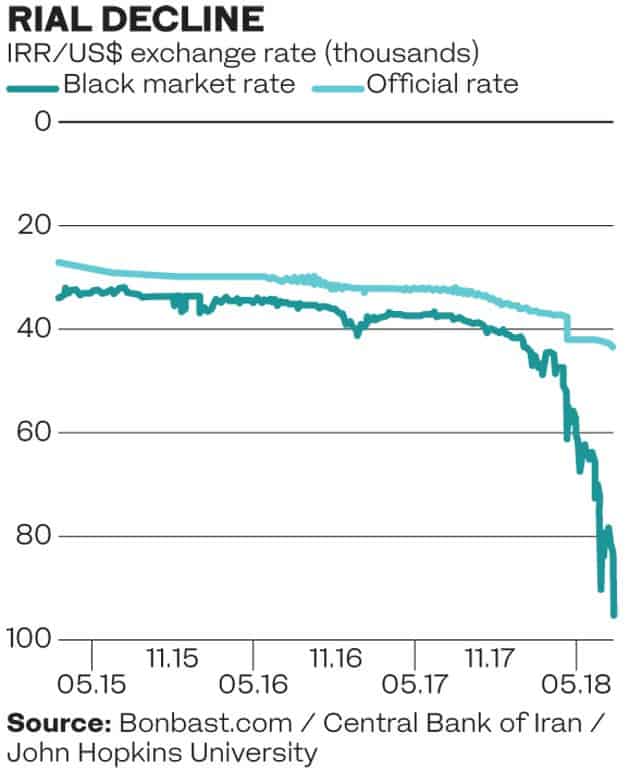 The Iranian rial has steadily declined since the withdrawal of the USA from the Iran nuke deal. The government of Iran pretends they have an “official rate” but the market doesn’t pay any attention. This decline is in the face of an inflation rate of 40%.

The smart money says this gets worse and worse as the Iranians struggle to deal with the economic sanctions.

What happens next, Big Red Car?

Recently, President Trump said he would visit with the Iranians – no strings attached.

The President of Iran – chap named Hassan Rouhani – said he’d be glad to meet if the US would simply rejoin the Iranian nuke deal. The Big Red Car thinks that boat has sailed. Sorry.

So, what will happen?

The US is going to reimpose the sanctions, Iran is going to be bled dry of foreign currency, the rial is going to turn into Weimar Republic paper, and the rulers of Iran are going to be posting on Indeed.com looking for work.

Or, they may come to their senses and talk to the US.

Dear reader, Iran is the world’s largest exporter of terrorism with mischief afoot with Hamas, Hezbollah, the Quds, and any of a number of other wicked organizations. We do not want Iran to have any spare change with which to fund terror worldwide. We do not want Iran working on missile technology. If they are broke, they cannot afford to do this stuff.

Iran is involved in the West Bank, Gaza, Syria, and Lebanon. You find a trouble spot in the Middle East and the Iranians will be there. Like in Yemen, where the Iranians are supporting and funding the Houthis while Saudi Arabia and the United Arab Emirates are on the same side as the Yemen government.

Iran does not play nice with others. This gets ugly on an ape and there will be changes in the leadership in Iran.

But, hey, what the Hell do I really know about anything? I’m just a Big Red Car. [Full disclosure: short the Iranian rial. Big league!]