1. The Republicans have no GOTV ground game that can compete with the Dems. This is compounded by the county map scale issue explained below.

2. The Republicans failed to raise sufficient money to compete with the Warnock campaign in the media. Warnock controlled the messaging – a series of non-stop, brutal attacks on the character of Walker until Election Day.

3. The Republicans have no national leadership at the Republican National Committee level that can send a SWAT team to deal with critical local elections.

5. The Republicans failed to close ranks and work for the overall good of the party.

Get out the vote is critical

Let’s look at some data to support the above assertions, shall we?

As you can see, Warnock bested Walker by 36,965 votes whilst the Libertarian Party Candidate drew 81,278 votes which prevented Warnock from winning the election outright as he did not obtain a majority – this is unique to Georgia election law. You must win a majority in Georgia or there will be a runoff for the top two vote getters.

OK, dear reader, here is the SO WHAT!

Warnock won by 49,719 votes, but the untold story is this: Warnock got more of his voters from the November election to the December polls.

The Republicans knew who voted in November, but failed to get 221,709 of them to return to the ballot box for Walker. This is a ground game, GOTV failure.

Herein lies the problem, dear reader, the Dems focus on mail-in, absentee, and early voting and the Republicans focus on Election Day.

The logic is unassailable – it is difficult not to find a time to vote or to vote from the convenience of one’s home during early voting and it is easy to find a reason not to vote on Election Day — travel, illness, weather, car trouble, lost cat, hungover.

Look at this map of the US as to which candidate prevailed in the 2020 election. 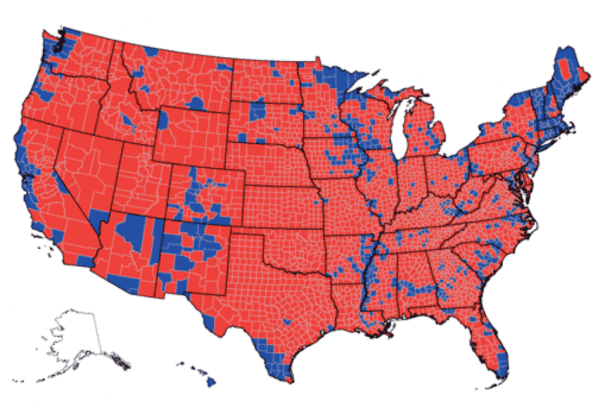 As you can see, the Republicans won a vastly greater number of counties than the Dems.

Now, look at the Georgia counties below. 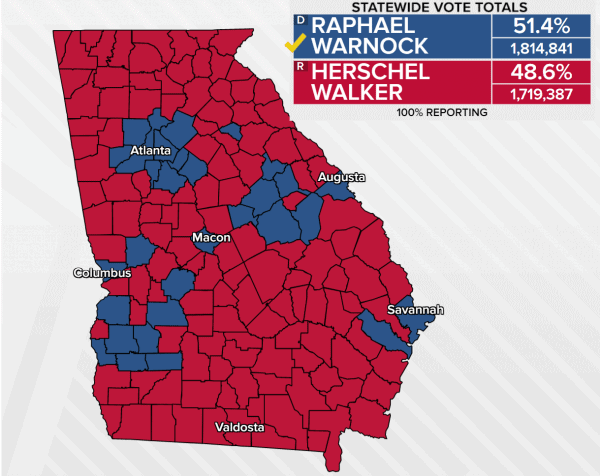 As you can see, the Warnock campaign/Dems won in the urban areas of Georgia: Atlanta, Columbus, Macon, Augusta, Savannah (top five cities by population in Georgia).

This allows the Dems to focus their management and GOTV efforts in a much smaller, more concentrated area.

1. Herschel Walker was a piss poor, flawed, ill-prepared candidate with a boat load of baggage that made him a tough sell and exposed him as a hypocrite. [Warnock is no better.]

Walker was a Trump guy and Trump did not pick a winnable candidate.

2. Walker did not get the support of the GOP elite because of the Trump stank and senate Minority Leader McConnell and others failed to send the money to Georgia.

It is time to get rid of McConnell unless the Republicans are content to continue to lose elections.

It is late for both McDonnell and Trump to hang up their spikes.

3. The Dems outraised the Reps – Warnock controlled the airwaves during the last month of the campaign. Money in politics is oxygen.

4. The Dems got out their November voters in grander fashion than the Reps.

This is blocking and tackling and the Reps failed. This is an organizational challenge at the county, state, and national level.

5. The Republican National Committee – perhaps in part because of the Trump stank and McDonnell’s enmity – failed to play a decisive role in the campaign.

It is time to get rid of the RNC head, Ronna McDaniel, but only if the Republicans want to win elections.

6. The Election Season v Election Day focus issue is real and will inure to the benefit of the Dems until the Reps get their collective heads out of their asses and do the same thing.

Bottom line – the Republicans blew it and will continue to blow it until substantial changes are made.

But, hey, what the Hell do I really know anyway? I’m just a Big Red Car and it’s 73F and sunny in Savannah.