I am taking a look at “core” ages 25-54 unemployment (BLS U-3) which factors out the very young and the Baby Boomers. It is the vast majority of the working population. 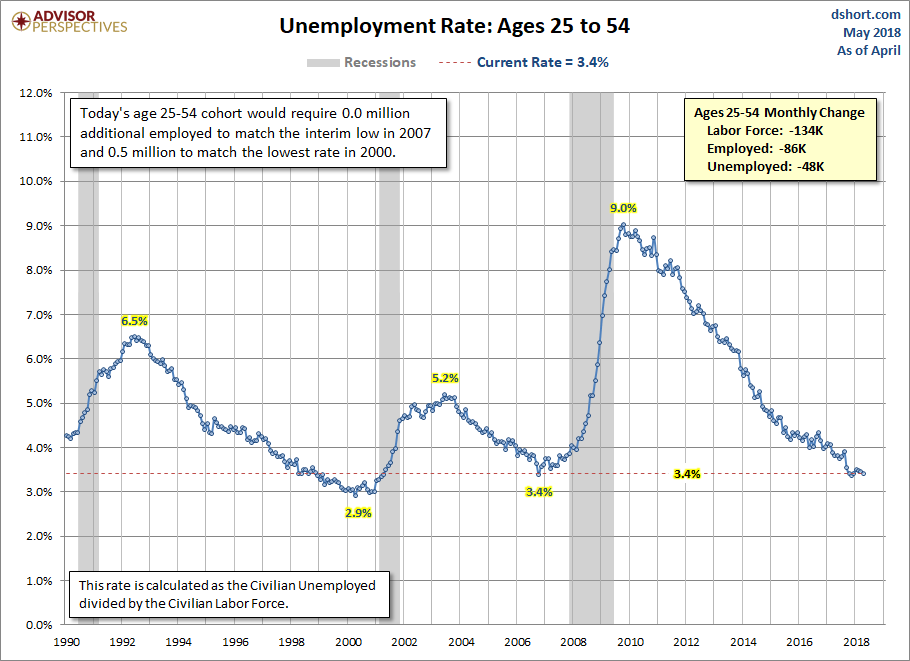 As you can see, unemployment for this cohort is at a very low level at 3.4%. You would have to go back to the turn of the century to find better numbers. Those numbers are only better by 0.5MM jobs. We could be there in the next six months.

The Labor Force Participation Rate – Civilian Labor Force divided by the Civilian Noninstitutional Population (i.e., not in the military or institutionalized) – for the same slice of America is as follows. 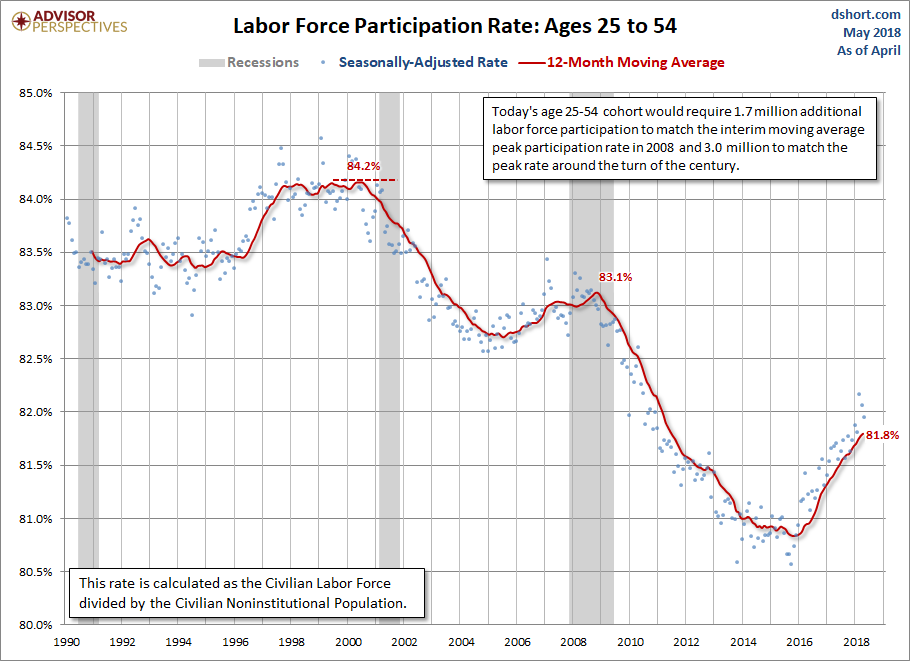 1. The US will have to create more than 1.7MM new jobs and fill them to hit the numbers in the 2008 timeframe.

2. The US will have to create more than 3.0MM jobs and fill them to hit the turn of the century numbers.

This is why I have said to be cautious about taking too much comfort solely from U-3 unemployment numbers. They may provide a false sense of optimism when you take a look at Labor Force Participation Rate.

On the positive side, if the economy were to continue to create and fill jobs at recent rates, it would take 1-3 years to hit those numbers. Can the USA do it? Yes, I think so, but we are a long way from there.

This is another chart worthy of your consideration. It shows the ratio between total jobs filled and the total population in that age slice. 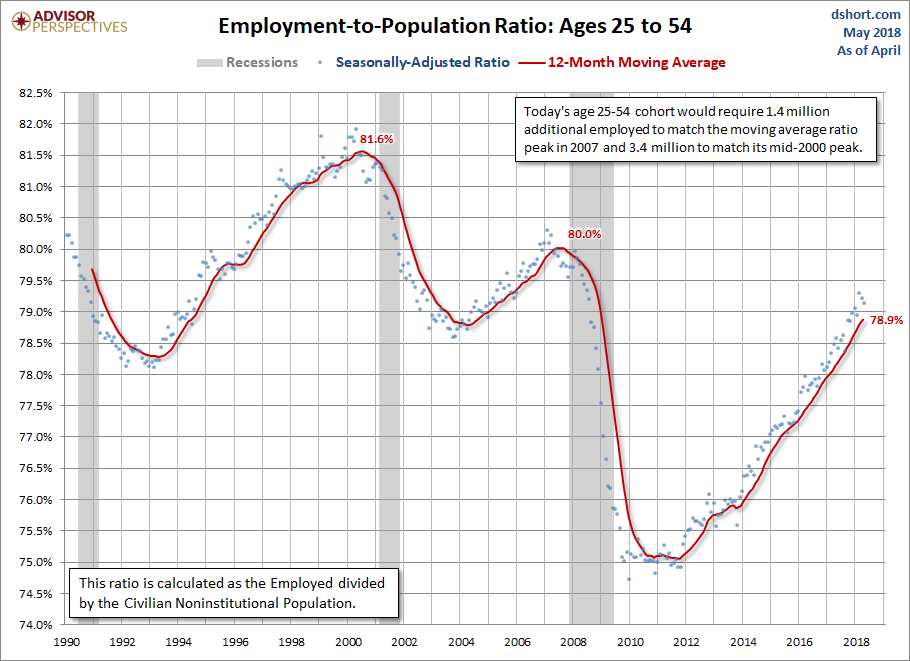 2. It will take an additional 3.4MM jobs to hit the turn of the century peak.

What are the Baby Boomers doing? They are working and retiring. Look at this chart. 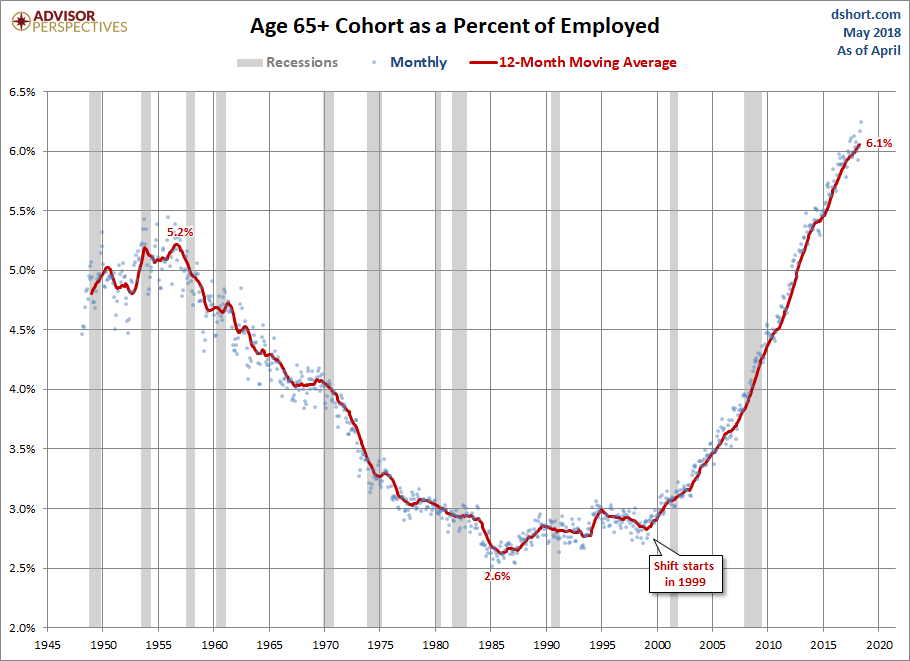 This chart shows the part time v full time employment picture for all over the age of 16. 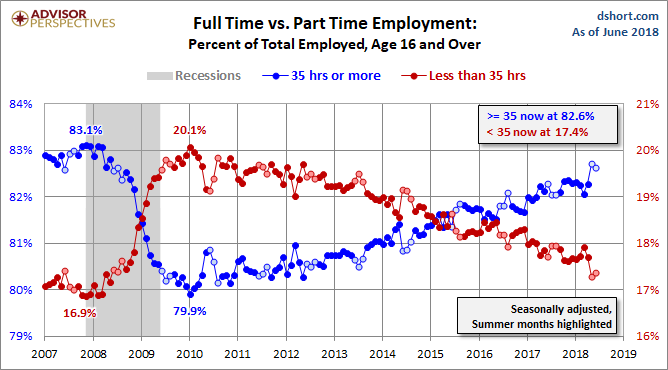 What it shows is that during the Great Recession the part time jobs began to accelerate and full time jobs began to decelerate. In 2015, the trend reversed itself. [Obamacare had some impact on this because of the impact of employers being fined if they failed to provide health insurance for full times, but not penalty for part timers.] 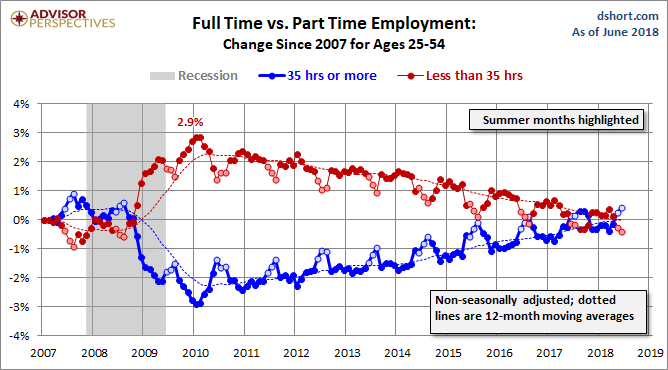 The US employment picture cannot reliably be assessed by simply looking at BLS U-3 unemployment numbers. One must be sensitive to core employment (25-54), the Labor Force Participation Rate, the Employment to Population Ratio, and the mix of full time v part time jobs.

Keep an eye on those Baby Boomers.

There is a structural change well underway in the US economy as it relates to employment. Know this.

We have said nothing about average household income and average wage rates (both increasing).

But, hey, what the Hell do I really know anyway? I’m just a Big Red Car. Be good to a stranger. Pump some sunshine into the world.