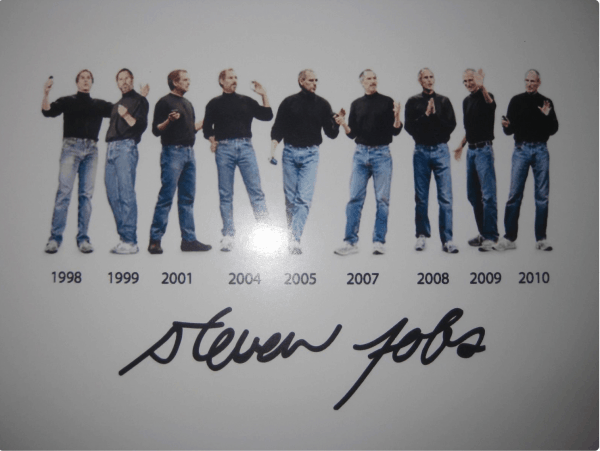 Steve Jobs (please note his elegant, simple look above through the years) is alleged to have said:

“Simple can be harder than complex: You have to work hard to get your thinking clean to make it simple. But it’s worth it in the end because once you get there, you can move mountains.”

I agree completely with this utterance. I have personally dealt with a great number of things wherein a bit of simplification has overwhelmed the complexity of a situation.

Once back in my Army days, I was required to be ready to move — upon an hour’s notice — from the continental United States to Germany and then to undertake an important wartime mission immediately upon arrival.

We knew exactly what we had to load. It took thirty minutes to load when we got our sea legs under us. [When I took over this unit, the unit had never successfully loaded out in less than two hours. I made a few simplifications.]

We kept a “go bag” of our personal items stored in a Conex container in the motor pool at all times and the armorer brought our weapons to the plane. The mess hall made box lunches. Believe it or not, the mess hall was the choke point in the process.

There was a gate in the fence from my motor pool directly to an air base next door. Three C-141s could taxi up to the gate, we loaded our equipment, took a whizz, and jetted off to Germany. [Pro tip: Do not forget to take a whizz. Do not drink coffee on the plane.]

Unbelievably, we finally could do this in an hour. It did not happen without effort and it took practice to be able to do it. We practiced twice a month. The fastest we were ever ready to taxi was 42 minutes.

I had a great motor pool sergeant and we were brainstorming it with an eye toward compressing the time at both ends — loadout and unloading. When we unloaded, we went to an ammo dump and picked up some pre-positioned explosives to go do our mission.

We did the following things to simplify the program:

1. We used a different team to load than the guys who were going to Germany. Seemed obvious to me. This made it simpler and faster for both groups — the loaders and the travelers.

2. We were told exactly how we were supposed to load the plane — driven by the pilot’s need to have an exact center-of-gravity so he could safely take off and land. This seemed inflexible to me. It was.

Upon landing in Germany, we had Jeeps with which we sped to the ammo dump to work through the paperwork and to get into the ammo bunker and identify the explosives.

This saved more than an hour which was a critical consideration.

4. The Air Force was totally cooperative and simply re-weighed the planes with the new equipment load out.  We worked out the new C-O-G. Pilots happy.

In dealing with startups, I see this all the time particularly in things like the sales cycle. One of the most interesting things I do is to ask the CEO, CMO, and Head of Sales to make a graphic of the sales process as they understand it — with no mutual consultation or collaboration — and to identify the choke points. They never match. Never.

Once they do this, they are able to rectify their disparate versions and then to simplify them. In every instance, this simplification entails removing multiple choke points — usually a single individual who must approve every transaction. Typically, this individual is the choke point.

The solution is to anticipate the problem, delegate the authority to more than one person, and, most importantly, to track the sales cycle based on the graphic.

It is really that simple.

As Ben Franklin is attributed to have said:

“If I had more time, I would have written a shorter letter.”

Simplicity can be elegant, but only if you make it so.

But, hey, what the Hell do I really know anyway? I’m just a simple Big Red Car.