So, the Big Red Car was able to score an interview with Debbie Wasserman Schultz, Chairwoman of the Democratic Party. It was the morning after the debates and Miss Schultz was in rare form.

And, dear readers, we have a scoop. First on the planet to announce the new name of the Democratic Party. Read on, y’all.

“How did the recent Democratic debates strike you, Madame Chairwoman?” I asked knowing she would want to talk about them. No reason to beat around the bush.

“Big Red Car, first let me say what an honor and privilege it is to be able to chat with you and your readers. I have been hoping to do this for some time. As to the debates, they went fine and I thought, in particular, that Hillary Clinton did very well.”

“Madame Chairwoman, as the chair of the entire Democratic Party is it proper for you to single out one candidate for praise?”

“Well, Big Red Car, you’re probably right on that. We did have some difficulty attracting candidates to oppose Madame Secretary. Believe me, I tried. It wasn’t easy to get Lincoln Chaffee out of his retirement home and that old socialist, Bernie, he’s not the pick of anybody’s litter. I did send somebody to comb his hair before the debates. Lot of good that did. I can’t remember the other two — help me out here, Big Red. Do you remember their names?”

“Yes, those two stiffs. Wow, could you believe that James Webb was a former Marine and got the Navy Cross, the Silver Star, and a Purple Heart? I had no idea who he was until the debates. Who would have ever thought any Democrat had ever fought for our country? Apparently, he even killed some NVA. Wow. Still, he’s so out of touch with where our party is going.”

She caught her breath for a second and then continued.

“That Martie O’Malley was Mayor of Baltimore before he was Governor of Maryland. You think he didn’t bring that up for a reason? Mayor of Baltimore? He and Webb are both of touch with where Hillary is going to take us — oops, I mean where the Democratic party is headed. Sorry. Little slip. Can we edit that out, please.”

“That’s a great lead in for my next question, Madame Chairwoman, where is the Democratic Party going?” I asked.

“Are you ready for some big news, Big Red? Some really big news?” she asked in her best Ed Sullivan voice. [Y’all probably don’t know who Ed Sullivan is, so just play along and Google him later.] 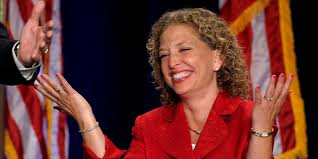 Miss Wasserman Schultz shook her lovely, curly, blonde hair in an attractive manner and then turned loose a tooth whitened “big” smile and said, “The Democratic Party is now going to be known as the American Socialist Party. What do you think about that, Big Red Car?”

“Well, it does seem to be true to form given the campaign promises made at the debates. It seems a fair description of the direction your candidates are taking their campaigns. So, yes, it seems appropriate. Whose idea was it?”

“Hell, Big Red, it was mine. I listened to the debates and made a list of all the free stuff Hillary and Bernie were promising and I just decided — let’s just put it out there. We’re the party of buying votes by giving away free shit. Why not?”

“Did you run it by any of the candidates themselves?”

“No, I’m the Chairwoman of the Democratic Party and though I do have to pretend to run a fair nominating process — Hell, who do we have but Hillary, let’s be honest here — I can call the shots myself.”

“Did you consider any other names, Madame Chairwoman?”

“I’d been drinking wine with some of my gal pals watching the debates and one of them suggested ‘The Party of Free Shit’ but we decided that even though it’s true, it was a little too obvious.”

“As to the Party of Free Shit, who is going to pay for all this free shit?”

“Well, those fucking rich Republicans, of course. We’re going to raise their taxes until we take everything. Every single thing they have. You think that President Obama has tried to “redistribute” their wealth, wait until Hillary is in office. She’s going to make those rich, fat bastards think their prostate inspections are a walk in the park. Haha, I like that one. Get it? Oh, Hell, you don’t even have a prostate, do you, Big Red Car? Sorry.”

The interview abruptly ended when Miss Wasserman Schultz had to take a call from Huma about a few things that Hillary wanted changed by the time of the next debate.

So, there you have it — The American Socialist Party beats out The Party of Free Shit by a whisker.

But, hey, what the Hell do I really know anyway? I’m just a Big Red Car and, no, I do not have a prostate. Be good, y’all and be nice to somebody who will be unnerved by your niceness.