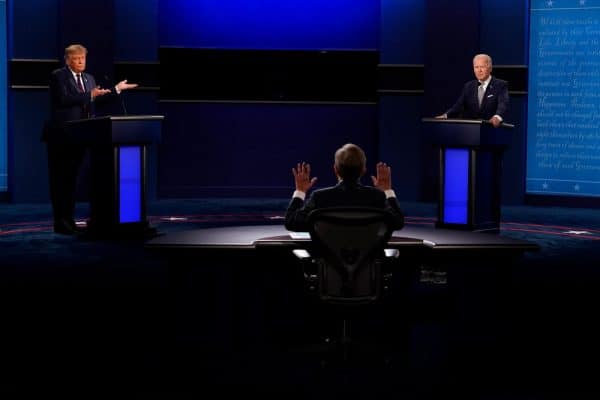 This is not the high hurdles under combat conditions.

This did not happen.

There was an adolescent Christians v the Gladiators quality to it all.

The physical plant, two men standing at podii (podium, podii, deal with it), with a seated moderator facing them is archaic and lends itself to a shouting match.

It fails to take advantage of the deployment of readily available technology.

3. The recent debates were poorly organized, had weak and biased moderators, and devolved into confrontational shouting matches in which the moderators took sides and lost control.

The topics were weak, redundant, and in many instances simply provocative. Why conduct a provocation rather than a debate?

Do we want a collision of competing ideas or do we want rigged, professional wrestling?

The CPD appointed three moderators, all with a work experience or known public behavior that questions their objectivity.

That is just so bush league as to be impossible to believe.

Here are some suggestions:

1. First, let’s get rid of the Commission on Presidential Debates. They are hopelessly conflicted, expensive, and their best work is terrible.

Get rid of them.

While we are streamlining things, let’s get the media out of the mix including using conflicted, biased reporters as moderators.

2. Let’s adapt a format that has as its stated and actual objective to inform the voting public on issues and to deliver a more informed voter at the end of the process.

Let the voters agree on what the issues are rather via crowdsourcing rather than a moderator who holds a lens of his own biases up to the subject.

3. Let’s give the debaters, the candidates, the questions, the issues, the topics long before the debate.

These are policies that will be rolled out carefully in real life, why not act like this is real life?

4. Let’s allow debaters a period of time to discuss the policy, for the other party to do the same, for each party to respond to the other one. I see this as:

Five minutes (could be ten) for Candidate A to discuss his policy on the subject.

Five minutes for Candidate B to do the same.

Five minutes for Candidate A to rebut Candidate B.

Five minutes for Candidate B to rebut Candidate A.

Next topic, they change the order around. Mics off for the silent candidate when the other guy is speaking.

5. The debaters are allowed to use a white board, a monitor, exhibits — the same things you would use if you were teaching a college course.

6. The debaters sit at a largish round table, so they can see each other, so the camera can fill the screen with the speaker and the silent debater.

If the candidate wants to stand and speak, then he stands, moves away from the other candidate, and speaks from that vantage point.

Again, mics off for the silent debater. The debaters can take notes and use notes. Real life is “open book,” right?

7. We try to cover three topics each of five nights. This makes for a total of fifteen nights.

8. There is live streaming and a web site, but there are no media direct feeds. They can take the live stream, but they cannot enter the venue to shoot video.

9. One night, we have each candidate take 30 minutes to tell us why he deserves to win the election, followed by a fifteen minute rebuttal.

Let’s take a breath for a second — one of the things being sought is less moderator involvement which kills the objectivity/bias problem before it gets started, less hot mic ragging, less opportunity for contentiousness (turn off the non-speaker’s mic), and more opportunity for the presentation and exchange of information for the benefit of the audience both at the site and at home.

10. We use a set of green, yellow, red lights and a countdown clock to enforce the time periods and then the mic goes off. No moderator trying to get the candidate to shut up. No candidate spill over.

11. On one night, Candidate A picks a moderator to interview him for 90 minutes. It can be anybody, but not a member of the media.

Do you recall the William Buckley – Ronald Reagan pre-election interviews? Those were substantive, important dialogues that demystified who Ronald Reagan was and how he intended to govern.

Candidate B does the same thing — pick a moderator to interview him for 90 minutes.

No rebuttal. Candidate B cannot listen to Candidate A’s interview.

What does this accomplish, Big Red Car?

1. The pace is reduced to that at which a person can absorb information.

2. The role of bias in the hands of a moderator is eliminated.

4. Nobody talks over anybody else — the mics — and the setting is conducive to discussion.

No drama, no histrionics, no distractions. Just informative, adult conversation.

5. We speed things up by using a thimbleful of technology.

6. We ensure that the voting public can access the information without having to taste the CNN or Fox sauce.

7. The ideas are the main wrestling adversaries.

8. We do this in a civilized manner because of the openness of it all.

Sure, dear reader, anything is better than that mess we’ve already seen.

What do we have to lose?

Be well, amigos. Be kind to someone today. You never know what burden the other guy is carrying. He may be one step from doing something stupid and your smile may stop him. Have a great week.