China recently announced the creation of a digital currency to which the world and the crypto world reacted with a number of different reactions. Let’s discuss some of the finer points here, shall we? 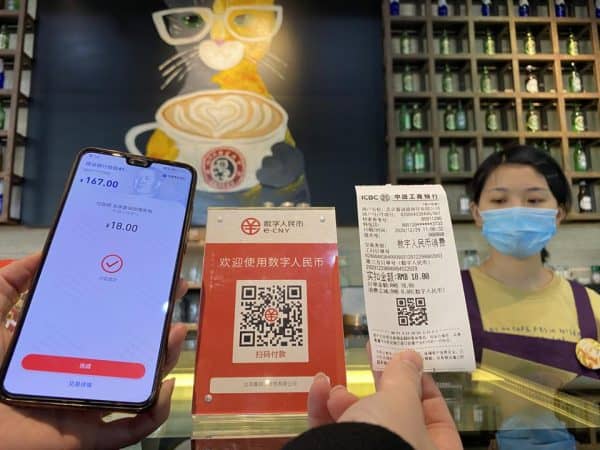 From left — digital yuan on a smartphone, the QR code for the payment system, and a receipt.

BTW, did you know that China invented paper money? All money used to be gold, silver before the invention of paper money.

This discussion is entwined with the issue of mobile payments, so it is important to know the following:

China is approaching a cashless society with cash and credit cards not being accepted by many merchants. What they do use is mobile payments.

31% of all payments in the United States are mobile payments

It is important to recognize that China is far ahead of the rest of the world in the arena of mobile payments and this figures prominently in their embrace of a digital yuan. Remember this fact.

Mobile payments typically involve a QR code in the merchant’s space which represents the applicable payment app (such as Alipay or WeChatPay) and a smartphone which contains the customer’s money in the customer’s bank. It is very simple.

Scan the QR code, verify the merchant and the invoice, identify the amount to pay, hit a button to make the payment — voila!

Your Big Red Car believes this high level of mobile payments is a look into the future in the United States. In many ways, the US is using the credit card system to provide the same function.

What exactly is a digital yuan, Big Red Car?

Great question. A digital yuan is simply the replacement of a paper yuan with a bit of code, digital wizardry in an account controlled by the government.

There would be no digital printing press in the basement. Do you believe them?

How would the digital yuan transact business, Big Red Car?

The Chinese assure us that it would transact business exactly as the paper yuan. Remember that China is a very advanced digital payment society as it exists right now.

After you scan the QR code instead of paying with your bank account using a mobile payment app, you would pay with the digital yuan which would be in a government account.

Why would China want a digital yuan, Big Red Car?

Ahhh, it’s China, amigos. It is all about exerting control.

You have to know about the Chinese Social Credit System. You can read a little about it here:

Communist China at 70 — A Bill of Particulars

1. What Communist China would obtain with a digital yuan is more control of their people and the ability to control their money. They could ultimately control payments completely. They could freeze an account.

Whilst cryptocurrency devotees will look at China and applaud their advanced use of crypto — in my view it really isn’t crypto — freedom advocates will see it as another knot in the noose around the neck of the individual Chinese citizen.

The Commies will literally be able to see every purchase made with the digital yuan.

2. The Chinese have this fantasy that the digital yuan would somehow supplant the US Dollar as the world’s reserve currency.

To put that into perspective 88% of all foreign transactions (current Bank of Int’l Settlements data) are settled with the USD while the yuan accounts for 4% with all of those transactions between China and close partner countries like Iran.

3. The Chinese also see this as avoiding the US banking system and therefore as a way to defeat American government financial sanctions.

If a sanction against Iran says no American bank can transact business involving Iran and the Chinese digital yuan can be used, it effectively circumvents the sanction.

Where is China on the digital yuan, Big Red Car?

The Chinese Central Bank has conducted trials with as many as 100,000 citizens. The trials went fine — remember China is becoming a cashless society and has an entrenched mobile payments system with good apps that work.

What could have gone wrong? The Reds even let Communist Party members pay their dues with the digital yuan — now that is convenience, eh?

One of the things that causes me to be skeptical as to the real “digital” nature of the digital yuan is the loss of anonymity. If you transact a piece of business with Bitcoin, you are anonymous. Not so with the digital yuan.

Would Communist China allow a citizen to hide behind a cloak of anonymity? Of course not. They are total control freaks.

In no particular order, consider the following:

2. It would be great for disaster relief and the payment for such things as stimulus payments — think about instantaneous credit of digital yuan rather than waiting for the IRS to get its shit in order.

3. Digital yuan could end counterfeiting? No volatility like Bitcoin?

4. Digital yuan would dramatically reduce crime and criminals under the cloak of anonymity as there will be no anonymity.

I think that the speed with which China embraced mobile payment apps — less than 10 years — portends that China will embrace the digital yuan quickly.

I don’t think any of the Chinese fantasy with becoming the world’s reserve currency will ever happen, but the US needs to be vigilant.

I think the digital yuan will absolutely happen just like there are millions of facial recognition cameras, just like the Chinese Social Credit System rules the lives of the individual Chinese citizen, just like everything else the Chinese are doing. They are and will be ruthless in its implementation.

I think the Chinese are also hoping that the 2020 Beijing Olympics are not cancelled and that the world will use the digital yuan at the Olympics and thereby spread it worldwide.

BTW, Big Red Car, what is the difference between the digital yuan and the digital renmibi?

Haha. They are two different names for the same thing.

Have a damn nice Tuesday.