Antifa is a militant, left wing, anarchist political action movement that embraces and uses violence as a means of destroying authoritarian government and capitalism.

Anfita is related to and embraces the philosophies of anarchism, Communism, Marxism, socialism, and social democracy (which is just socialism for politicians).

They identify their opponents in this struggle as being the government, the police, the far-right, the alt-right, neo-Nazis, KKK, right-wing extremism, white supremacy, and racism. Hard not to oppose that bunch.

They seek and engage in public confrontations with their opponents and openly engage in violence against them.

There is no deep philosophical commitment amongst its rank-and-file — many of whom are just punks — whilst the leadership is clever, artful, and cunning in their strategy and tactics.

They do not generally support mainstream liberal Democrat efforts to effect change, preferring instead to directly and violently confront those they oppose. This is not a Get Out The Vote movement and they do not take their orders from Nancy Pelosi.

Antifa opposes conventional anti-fascist conservatives and liberals as these groups abhor and are not willing to embrace violence.

Since the 2016 election of President Trump, Antifa is universally opposed to the Trump admin and all Trump supporters. This makes them naturally sympathetic to Democrats under the theory that “the enemy of mine enemy is my friend.”

Researchers and historians have tried to form an intellectual tie to the opposition to Benito Mussolini’s brand of Italian fascism from the mid-1920s. Good luck with that.

There is a philosophical connection to earlier movements such as “Occupy” like “Occupy Wall Street.”

In the last decade, Antifa has developed a strategy of sticking its nose into every conceivable public pain point. They will beat up an unsympathetic member of the media, will go to Charlottesville to protest Confederate monuments, and they will use any racial tension in the United States as a rallying point for their activities.

I view Charlottesville in 2017 as the Antifa “coming out party” when they crashed the “Unite the Right” rally.

They attempt to be scrupulously decentralized thereby protecting the purity of  each operating cell though the high level coordination amongst its leaders provides obvious linkage. This is fairly standard spy cell and terror cell discipline.

Antifa has made the decision to play away games — meaning they will transport members to a remote site to foment violence. This is a big change and shows they have obtained sufficient funding to do this on a moment’s notice. They find lodging for and provide feeding to their troops.

Antifa stockpiles rocks and bricks in strategic locations whilst providing tools to their members — such as hammers and long metal batons both to be used to shatter glass windows and storefronts.

Antifa is a native digital organization which is making war via the Internet at all times.

Antifa riot operating units remind me of an infantry platoon engaged in “fire and maneuver” training. When they are confronted with a force of police coming toward them down a street, they will give ground, slip backward, split in half, take side streets by the halves, and re-emerge behind the police presence.

They will similarly make a “movement to contact” in which they continue to move down a street until they encounter organized resistance. Meanwhile, in the territory behind them they will engage in bad acts.

When they encounter an enemy, they engage in a tactic in which they surround the individual and close in on him from all points of the compass ending with a violent attack from a number of persons. This is exactly what they did with the gay journalist Andy Ngo who had incurred their wrath and a traumatic brain injury. 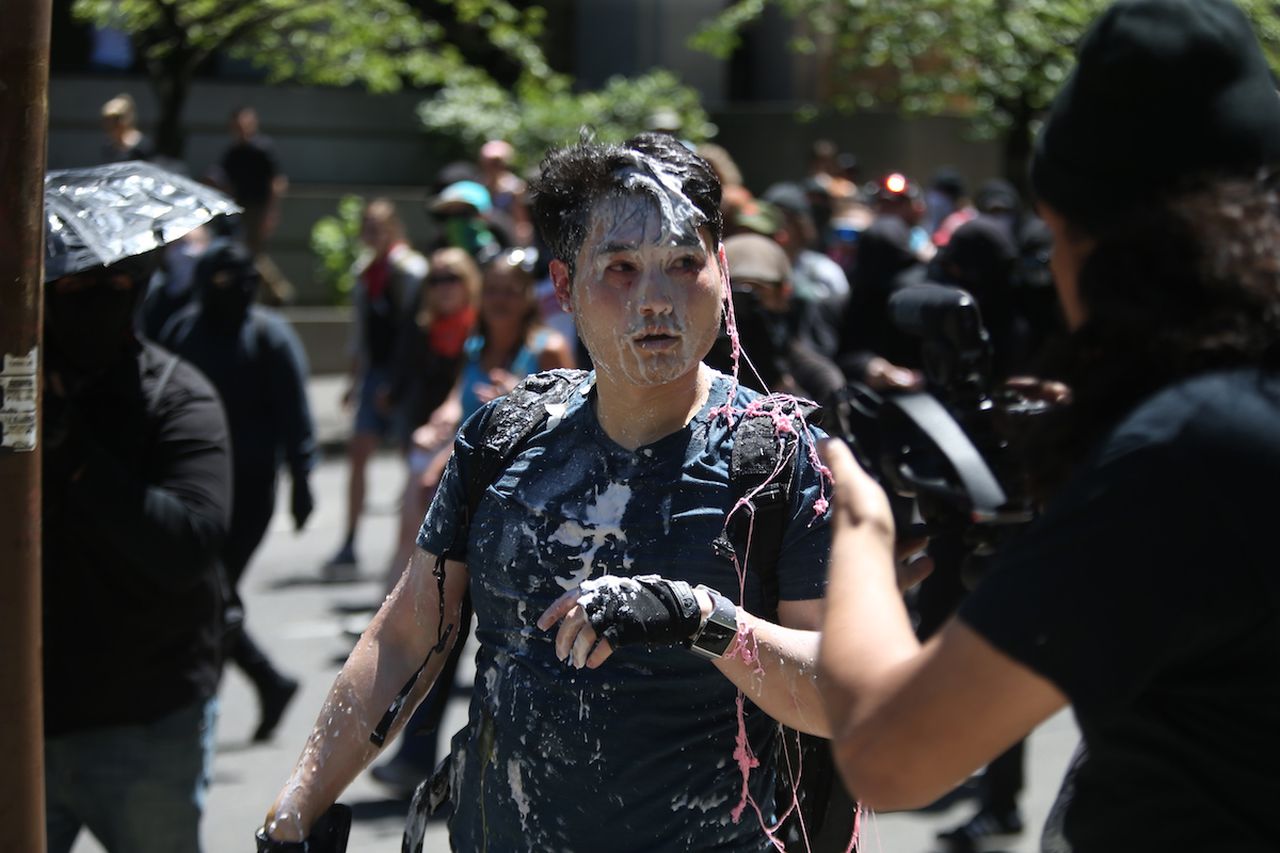 Antifa adopts “black bloc” as their visual organizing glue. Black bloc means black clothing, many times selected for anticipated violence, black hats, black helmets, black masks, black gloves. In times of COVID19, their masks do not alarm, but they also seem to be much deeper than they truly are.

They often wear civilian clothes under their black bloc and shed the black to emerge in civilian garb and escape. Obviously, this conveys extraordinary anonymity to Antifa. They issue hammers and metal poles to their troops while stockpiling bricks and rocks for both their own people and others. This is a new hallmark at a tactical level — supplying things to create mischief by others in the neighborhood. This creates personnel leverage. [Antifa is a bunch of brick and rock throwers.]

Antifa members will smash windows thereby providing others who are not Antifa members the access to engage in looting. Similarly, they will burn a vehicle to encourage others to do the same while supplying them with materials to start fires.

Radios are being used by Antifa in a manner that reminds me of platoon leaders and company commanders coordinating their efforts via radio.

Logistically, they have made great strides including transportation, arranging local lodging, supplying tools, and material. They also provide food and compensate some of their fighters.

This is not the same Antifa as five years ago.

So, dear reader, this is not the peaceful protest that is the legacy of the civil rights movement or the protected speech of the First Amendment. This is a domestic terror unit that uses violence to achieve questionable objectives during times of crisis often piggybacking on the raw emotions as happened in the instant case with George Floyd.

Left to their own devices, Antifa will grow stronger. They will continue to marshal forces, improve their logistics, perfect their tactics, provide tools and material, leverage personnel, all while engaging in violence, arson, looting (primarily provoking it), burning public property, destroying private property, and exacerbating the angst in America.

As a domestic terror organization, it is time to recognize what we are dealing with and act accordingly.

But, hey, what the Hell do I really know anyway? I’m just a Big Red Car. Be well. Be safe.